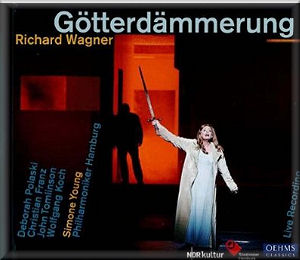 Previous installments in the Hamburg Ring Cycle have been a hit and miss affair, but this Götterdämmerung is a real success. Even without visuals, it is a dramatically coherent account and the on-stage chemistry between the singers really comes across. And almost every performer here is in the top league of modern Wagner interpretation. Nobody is perfect, of course, but the minor faults from each of the singers, and from each of the orchestral sections, does little to diminish the overall achievement.
Every member of the cast has something impressive to bring to this production. Christian Franz is an expressive and believable Siegfried. His performance suffers from some rhythmic inaccuracies in the first act, but he has no trouble with the high notes, nor with projecting across the orchestra. Deborah Polaski is similarly secure in her pitching as Brünnhilde. I found her performance very endearing, her natural tone, even at the top, making her the focus of attention in all the scenes she sings. This allows the Immolation Scene to be all the more definitive, with the audience really feeling Brünnhilde's transcending compassion. The small role of Waltraute is given a similarly endearing reading by Petra Lang. She is sometimes a little sharp on the top notes, but her tone is direct and her singing always filled with emotion.
The baddies are just as convincing. This might well be the first recording of John Tomlinson singing Hagen, and if it is, it is worth buying for him alone. He has the best Hoihos in the business, and the passing years have done little to diminish their power. Wolfgang Koch is similarly menacing as Alberich, although he doesn't quite have the depth of tone in the lower register, and in their scene together in Act 2, he is comprehensively outclassed by Tomlinson.
Gunther and Gutrune, not roles that usually attract star casting, are here taken by the excellent Robert Bork and Anna Gabler. Both put in dark and complex readings. There is a sinister air about every scene in which they appear, and both sing with dark-hued tones that underline their malicious influence. Gabler in particular rises head and shoulders above any other singer I have heard in the role, and the emotional complexity of her singing ensures that Gutrune is always presented as a real character and not just a minor functionary of the plot.
There is some great ensemble singing from the Norns, the Rhinemaidens and the chorus, and the orchestra is also on good form. The brass make the most of their many chances to shine, and have an impressive tonal palette ranging from round, warm chords to biting, angular interjections. The ensemble in the orchestra isn't always completely accurate, and that might be a factor to separate this recording from the very best on the market.
The orchestra is well served by the audio recording, much better in fact than the singers. Everything that happens on the stage sounds frustratingly distant, at least in comparison to the orchestra. The engineering does a good job of representing the physical positions of the singers on the stage, but perhaps goes a little far in this direction, add more apparent distance between the singers and the audience than is necessary. That said, the balance between the singers and the orchestra rarely suffers, thanks perhaps to the impressive casting.
For me, the biggest problem with the previous installments in this cycle was Simone Young's interpretation. She has a tendency to let the music flow without intervening to articulate its dramatic extremes. That tendency remains here, but is not as significant. In fact, to a certain extent she is able to turn it into a virtue. Some of the longer passages, especially in Act 1, benefit from her ability to maintain a sense of narrative flow without getting too involved in the individual moments. This also allows the singers the space they need, although the lack of dramatic engagement can be as dangerous for the stage action as it can in the pit. And the set pieces – Rheinfahrt, Funeral Music, Immolation Scene – good as they all are, never feel like the fully committed performances of the greats of yesteryear.
Nevertheless, this Götterdämmerung gets my recommendation on the strength of the singing. A modern recording of the work usually has at least one weak link in the cast, and it is usually either Siegfried or Brünnhilde. Not so here, the principals are all more than up to Wagner's many challenges, and equally surprisingly, the supporting cast is too. Minor ensemble problems in the orchestra and a general lack of dramatic intensity are the downsides, but it's the singing that makes or breaks any Wagner recording, and the singing here is as good as you could want.