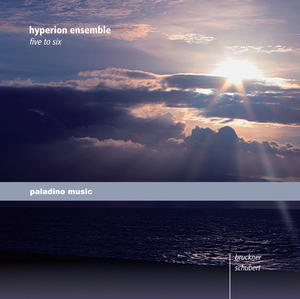 Bruckner's String Quintet is a great piece, but it's a tricky one to couple. The only other significant chamber work in the composer's output is an early String Quartet in C, the curiosity value of which hardly justifies its repeated appearances on disc with the Quintet. The String Quintets of Brahms also regularly appear with the Bruckner, but aesthetically they are from opposite ends of the Viennese spectrum and don't really have much to say to each other.
Schubert, however, is an inspired choice. Orchestral concert programmes coupling the symphonies of the Schubert and Bruckner can do a great job of highlighting the progressive nature of Schubert's art and the Classical structures underpinning Bruckner's. Schubert's Quintet in C would be the obvious choice here, but it is far too long. So instead, the Hyperion Ensemble have opted for an arrangement, by their violist Firmian Lermer, of the F minor Fantasie, one of the masterpieces of the piano duet repertoire.
That said, the Bruckner is definitely the main attraction here, so it is a natural choice to programme it first. In deference to the coupling, the Ensemble give the work a thoroughly Classical reading. Phrases and forms are always clearly and carefully articulated. Dynamics are supple but never extreme. And, as in any great Schubert performance, this Bruckner is very much led by the melodic lines.
This can mean that the textures become top-heavy, and it is curious that even with two fine viola players, the violins still tend to dominate most of the textures. The resulting textures can often sound thinner than on other recordings, especially in the climaxes to the outer movements.
The inner movements come off better. The Scherzo has that combination of rustic charm and effortless sophistication that only an Austrian ensemble can provide. The Adagio, while its tempos can occasionally feel rigid, succeeds thanks to the sheer beauty of the melodic playing, especially from the first viola and the cello when each gets their turn in the spotlight.
Expanding the ensemble to six players for the Schubert may have been suggested by the number of notes that the composer distributes between the two pianists in the louder passages. Fortunately, the arranger is quite sparing with his resources and the textures never feel weighed down by the number of players. The music is certainly dramatic when it needs to be, but in general the interpretation is quite laid back. Two pianists would need to work hard to create the variety of textures and moods this music requires, but six string players are able to do the same without over-exerting themselves.
Some listeners may feel that symphonic drama is lacking in both works. The compensations though are precision, clarity and deep emotional engagement with the melodic lines. As many conductors have demonstrated, and I'm thinking particularly of Gunter Wand, a programme that combines Schubert with Bruckner is invariably dominated by Schubert's artistic persona. And it is just so here. Bruckner's String Quintet has never sounded so Classical, so well structured and so civilised. Plenty of recordings of the Quintet present it as a symphony in microcosm. This one makes a convincing case for treating it purely as chamber music.