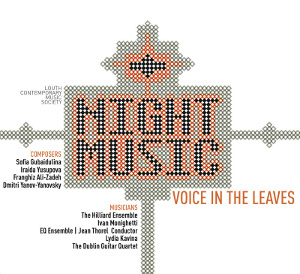 Composers from former Soviet republics have a surprisingly hard time finding audiences in the West. A number of Russian conductors working in the UK try to programme their works, but almost always face a hostile reception from the critics, who either don't understand or (more likely) don't care about the recent musical developments in the East.
Fortunately, the Louth Contemporary Music Society continues to champion many of these composers, to commission and perform their works, and most importantly, to record them for wider dissemination. It would be an unreasonable demand on such a small organisation to keep us up to date on every development from Eastern Europe and post-Soviet Asia, but the favoured house style, an ever-more sophisticated and atmospheric post-minimalism, is certainly one of the dominant trends there, making these roughly annual updates all the more useful.
The four composers represented on this disc are all from different countries in central Asia: Yusupova from Turkmenistan, Yanov-Yanovsky from Uzbekistan, Ali-Zadeh from Azerbaijan and Gubaidulina from Tatarstan. The stylistic consistency between their works is surprising, and it is difficult to say if this is the result of continuing stylistic agreement between these neighbouring countries or just careful programming. An important unifying factor is the use of solo cello in almost every work. The cellist, Ivan Monighetti, is very much the focal point in most of these works, and his lyrical and technically-assured performances are a key factor in their success.
The first piece, Kitezh-19 by Iraida Yusupova is for solo theremin and tape. Strangely, this is the ideal combination to introduce the cello works later on, as the sound of the theremin is so similar to the cello. Both instruments, at least the way they are played on this disc, produce long, beguiling threads of melody, warmed with a very slight vibrato. For most of Yusupova's score, the theremin just holds a single note, while bells and plucked string instruments (shamisen? sitar?) are heard on the backing. The soloist is Lydia Kavina, one of the theremin's most prominent exponents and great grand niece of the instrument's inventor. She puts in a fine performance here, although there is little in the score to test her skills.
Works by Yanov-Yanovsky, Ali-Zadeh and Gubaidulina present the solo cello in three very different contexts: with ensemble and tape, unaccompanied and with guitar quartet and double bass. Ali-Zadeh's work, Ask Havasi, is the solo work, but it lacks nothing in terms of expressive focus and intensity. The consistency of the recorded sound is another important factor in the coherence on this programme, and the warm church resonance that the cello is given means that its unaccompanied sound is never thin. That said, there is something quite grounding about this unaccompanied work. There are no extended performing techniques, so the music has to rely instead purely on its melodic properties, which are sufficiently beguiling to carry the piece.
By contrast, Gubaidulina's Repentance sets the solo cello against an ensemble made up of double bass and a group of guitars. Although that's a counter-intuitive mix, there are a number of points of aural similarity. The cello's pizzicato, for example, brings it closer to the ensemble, and Hawaiian style slides from the guitars link them with the cello's portamento. As with many of Gubaidulina's scores, this is a long and intensely spiritual piece (even with Hawaiian guitars!) and at 23 minutes it does outstay its welcome a bit. But there is a lot of excellent music here, and I particularly like the Orthodox chants picked out on plucked strings – strong hints of Schnittke there.
Dmitri Yanov-Yanovsky provides two works, Night Music a work for cello, ensemble and tape written in 2000, and Morning, commissioned for this project and completed in 2011. Night Music is the more accessible of the two. The large ensemble and the tape allow the composer to explore a wide range of timbres, although if you listen closely most of the timbral variety is actually coming from the cello. For all its minimalist ambience, Night Muisic has a clear, progressive structure, a musical journey carefully paced from beginning to end. That helps is to justify its 16 minute span, although it raises suspicions that, innovative as the textures are, the structuring is actually quite conventional.
There's nothing conventional though about Morning, the work Yanov-Yanovsky wrote specially for this project and that ends the programme. The piece is for singers – The Hilliard Ensemble – and a group of instrumentalists, in which the cello again predominates. The singers perform a setting of words by the American poet Robert Lax, harmonised to slow but dissonant chords. It is so rare to hear dissonant, or even non-tonal, choral music that the singing jumps out of the textures, perhaps more than it is intended to. But the singers are more than up to this sizeable task, and perhaps the composer heard some of their excellent Gesualdo recordings before deciding just how much dissonance he could get away with in the choral writing. But it is a fascinating piece, and an ideal closing work for the programme, fitting in as it does to the overall mood, but adding something unsettling and new to it as well. A taste of what is to come on the next LCMS album perhaps? Let's hope so.