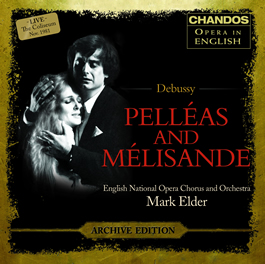 This ENO Pelleas dates from 1981, just as the company was gearing up for its triumphant 'powerhouse' decade. One or two names here, most notably Elder and Tomlinson, would go on to be central players in that astonishing run of productions. And there is a similar sense of magic here too. Everything comes together to make this an impressively coherent and atmospheric reading.
Those in favour of opera in English will be grateful to Chandos, and to the ever-philanthropic Peter Moores, for this commercial release of an English language production, a rarity by any measure. Those with an allergy to the idea (and that includes me) will be pleasantly surprised at what the vernacular can offer this opera. The clarity of the diction from every singer makes the English translation worthwhile, and while the libretto (English only) is included, there are very few occasions when the listener might feel the need to reference it. The translation, by Hugh Macdonald is excellent. It flows with the same lilting prosody of the original and never grates against the agogic structure of the music. Perhaps one of the reasons for the success of the translation is the fact that Debussy, unlike Wagner, always keeps the music at arms length from the words, allowing the libretto to play out more as a play, whatever language it is sung in.
The cast is strong, especially the leads. Robert Dean has a rich tone as Pelleas, although he sometimes struggles at the top. Eilene Hannan has the most French diction among all the singers in her portrayal of Melisande. Her tone often tends towards speech, all the better to hear the words. Sarah Walker has an expansive and emotive tone as Genevieve. It is interesting to hear John Tomlinson, here just about to reach his high plateau as a singer, which he as only just begun to descend from in the last year or two. He puts more emphasis on the individual words than the other singers, and is perhaps a little too emphatic at times. He also puts on a surprising amount of vibrato, not something we associate with him these days. The only weak link in the cast is Rosanne Brackenridge as Ynoild, whose tone is often strained and whose high notes are often flat.
Mark Elder gives a relaxed yet precise reading of the score, with plenty of emotion and without any jarring gear changes at the transitions. He maintains an ideal balance between the stage and the pit, and also gets an impressively emotive sound from the orchestra, with plenty of swooning from the strings when the score demands.
Sadly, neither the orchestra nor the singers are well served by the audio quality. This is one of the many BBC opera recordings from the 80s and 90s that sound as if they were made at least 20 years earlier. The recording was only made for broadcast, but even so, the murky underwater quality to the recorded sound does nobody any favours, least of all the violins, whose range of colours is seriously limited by the sound reproduction.
But we should be grateful the recording exists at all, as it documents a performance that was no doubt a pleasure to experience. Given that it was only 30 years ago, it seems a little premature to give photographs of the artists in sepia, especially as most of them are still working. Another link between past and present is Hugh Macdonald, who returns to give informative programme notes. A little more information about the production itself might have been nice, especially as this is an 'archive edition', but otherwise this is a handsome package, and should be of interest both to those who remember the show and those who have grown to love Debussy's opera since.