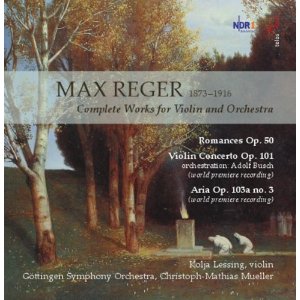 Buy from:
They're like London buses, recordings of the Reger Violin Concerto, you wait decades for one and then suddenly two turn up at once. This recording from Kolja Lessing has had far less publicity in the UK than its rival, from Tanja Becker-Bender on Hyperion (DA67892), but from the samples I've been able to hear of the latter on the internet, they seem to be of comparible quality.
Lessing has an interesting gimmick up his sleeve, in that he, or rather the Göttingen Symphony Orchestra that accompanies him, use the orchestration by Adolf Busch for the first time on a commercial recording. Given the almost continuous criticism of Reger's music during his lifetime, it is surprising that none of his other works have been subject to similar posthumous revision. Busch's concerns about the concerto focus on the density of the orchestration, and in an effort to rectify matters he drastically reduced the textures in an effort to improve the music's clarity.
But any possible increase in clarity can only be at the expense of the music's sweeping symphonic breadth, and that is a high price to pay. Much like Reger's Piano Concerto, the Violin Concerto uses its orchestral forces to highly dramatic ends, so reducing the numbers completely changes the atmosphere. It would be an exaggeration to say that chamber music textures result, but thinning down the orchestra does make the tuttis more liner and less chordal.
Personally, I don't think any of this is necessary. The best recordings of the work, and I'm thinking primarily of the one by Manfred Scherzer and the Staatskapelle Berlin under Herbert Blomstedt, have all the clarity you could want. And although Reger does occasionally go to town in the orchestral tuttis, he is always careful to reduce the accompanying textures beneath the solo violin. Although Busch's version was popular in its day, thanks largely to his own performances, it seems obvious why nobody has since chosen to record it before now.
That said, the reduced textures certainly suit Lessing's tone. He is an agile violinist, but he's not the sort to go to the extremes of dynamics that the original orchestration would require. His sound is precise and focussed, although his phrasing and rubato always keep the music lively and unpredictable. Mueller ups the tempos slightly from those on other recordings, something he is at greater liberty to do given the reduced textures. So this version of the work is given a good showing for its first time on disc, but I remain unconvinced that it is in any way better than the original.
Like Becker-Bender, Lessing couples the Concerto with the Two Romances Op.50. These are given excellent performances by orchestra and soloist alike, and the roundness of tone that is so frustratingly absent in the Concerto is apparent throughout these two short movements.
The disc ends with another interesting coupling, the Aria Op.103a no.3, which is also apparently given its first commercial recording here. The piece was originally written for violin and piano, but the orchestral version is the composer's own. It is very much in the wistful, nostalgic spirit of the Romances, and it is a mystery why they should have fared so much better than it on record up till now. The work has an exceptionally integrated structure, its six minutes playing out as a single arch of melody without any award hiatuses or transitions. Again, Lessing's focussed but never pedantic approach is ideal, and even when the music peaks to a crescendo, he retains a valuable sense of intimacy in his playing.
Reger's output was certainly variable, but it was also very large, so it is encouraging to make a discovery like this, a richly melodic and perfectly formed piece that has hitherto been unknown to the record industry. Here is hoping that performers of the calibre of Lessing and Mueller continue their search and uncover more such gems for us in the future.