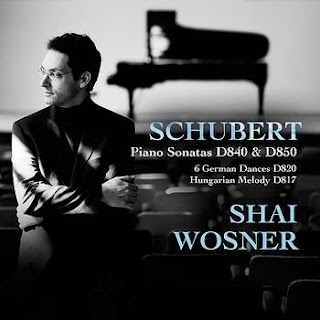 Clarity, precision and discipline are qualities all too rare in recordings of Schubert's piano music. His infectious melodies are usually more than the performer can resist and the tunes end up leading the tempos and phrasing.
But Shai Wosner takes a different approach. He knows that Schubert's melodies don't need any help, so he makes no effort to mould the individual movements around their themes. Instead he prioritises the architecture. The structure of Schubert's movements is rarely innovative, but his use of traditional forms is always effective.
From the first, quiet notes of the D840 Sonata it is clear that Wosner is thinking ahead and looking towards the movement's climax. And when the climax comes it is earth-shattering. The lack of rubato and the extreme dynamics make Wosner's playing seem all the more insistent – obsessive even. This, combined with the relatively dispassionate approach to the melodies, makes the readings of the two sonatas almost symphonic. In his liner notes, Wosner compares the opening movement of the D840 with a Bruckner symphony. Hearing anybody else play the work, the comparison would seem far fetched, but Wosner demonstrates exactly what he means.
Given the austerity of his approach, it is ironic that Wosner has chosen works inspired by folksongs and rustic country life. He explains that most of Schubert's life was spent in Vienna, but that these works are associated with his few stays out of town, most notably as a tutor to the Esterházys. Perhaps his intention was to save this music from the pastoral and excessively Romantic readings you find elsewhere and to locate it firmly in the Classical era.
In fact, Wosner's dynamic range, the power of his instrument (a Steinway D) and the sophistication of his touch all make the results sound thoroughly modern. His touch is precise and clear yet infinitely varied in texture and colour. This is where subtly comes into Wosner's Schubert. Where most other pianists would make their mark on this music through the shaping of the phrases, Wosner relies on the sound that he makes at the piano to set himself apart. And the clear, ringing tones he achieves in every register and dynamic make each moment of this recording a delight to hear.
The quality of the sound recording helps to get this essential aspect of Wosner's playing across. The bass end of the piano, not a region usually associated with Schubert, is often put to dramatic use, both in thundering climaxes and distant pianissimos. The presence and immediacy of the piano's tone down here really allow Wosner to create the atmosphere he is looking for.
So what now for Shai Wosner? This disc is easily the equal of his previous offering on Onyx, which paired Brahms with Schoenberg to impressive effect. I could imagine both Brahms and Schoenberg appreciating this kind of reading of Schubert, the clearest precursor to their disciplined Romanticism. It would be fascinating to find out what Wosner would make of Mozart's Sonatas. As here, there would no doubt be a certain tension between the text and the interpretation, but this pianist has a knack for making the familiar sound fresh and new, so a few more discs of the core Viennese repertoire would be very welcome indeed.