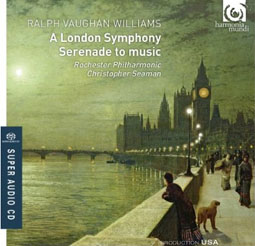 British symphonies played by American orchestras are a rarity. Elgar's First has a toehold in the repertoire, but otherwise American listeners have had to rely on recordings by British orchestras to hear the diverse variety of symphonies that British composers have produced through the 20th century. In the early 1990s, the Bournemouth Symphony Orchestra planned to tour the States with Walton's First, but when it became clear that audiences were going to be put off by it, they fell back on Elgar's First instead.
But Walton's First Symphony has recently been performed by many top American orchestras under the baton of an unlikely proponent, Semyon Bychkov. By all accounts, these performances have been electric, and have begun a new chapter in the history of British music in the States. So Harmonia Mundi have chosen an excellent time to record Vaughan Williams' London Symphony with an American Orchestra and presumably for American audiences. The conductor though is thoroughly British. Christopher Seaman has deep roots in the British orchestral tradition, and a letter reproduced in the liner of this disc gives an encomium for a London Symphony performance of his from no lesser authority than the great Adrian Boult. Seaman also has a long-standing relationship with the Rochester Philharmonic, having only just stepped down after 13 years as the orchestra's artistic director.
And the orchestra give him everything. The playing from every section of the ensemble is first rate. Particular mention should go to the soloists in the middle movements, the harp, oboe and horn. The tuttis are always controlled and defined, but with plenty of punch too. The Rochester Symphony don't have much of an international reputation, but on the basis of the playing here, they certainly deserve one.
Christopher Seaman brings an English sensibility to this music, and it is easy to hear why Boult admired his VW. But there is a stylistic clash evident throughout between the conductor and the orchestra, and to these British ears it is not always constructive. The orchestra give a thoroughly American reading of the score. Everything is bold and clear, the textures unambiguous, the mood and atmosphere always clearly defined. As a result, the opening lacks mystery, the ending seems arbitrary, and for some reason the Scherzo lacks vigour. Seaman might occasionally indulge himself in whimsical asides, but his players iron out any potential irony or self-effacement. It seems churlish to complain, especially as the players compensate with precision playing that few British orchestras could match. But it is always apparent that this is an American reading, which given the thoroughly English nature of this music can seem perverse.
But if the recording is, as I suspect, aimed primarily at American listeners, then the cultural bridge that it represents may ultimately work in the music's favour. Those big-boned orchestral sounds from US orchestras always play better to home audiences than they do in Europe. And for all its local colour, the music is great enough to accommodate a range of different readings.
Serenade to Music is the filler, and it is performed in a similar way. The brief wind solos in the opening bars are a particular treat, but the choir, when it enters, is more than able to hold the centre stage. The SACD sound quality is up to Harmonia Mundi USA's usual high standards, which must be one of the reasons why the orchestra comes off so well. Surprisingly, the choir is treated by the sound engineers as a homogeneous unit, and given the sophistication with which VW makes each singer simultaneously a soloist and a chorister, that feels like a missed opportunity. But when the individual singers are given actual solos, each comes across with a distinctive musical personality. A couple of the female soloists put on more vibrato than I like to hear, but that does add an air of authenticity. Each time one of these wobbly high-register vocal lines appears, I'm transported back to the British operatic sound of the 40s and 50s. Beecham, Wood, Boult and probably VW himself would all have approved, but for the first time in this recording, I wished the performers would just be a bit more American about things.