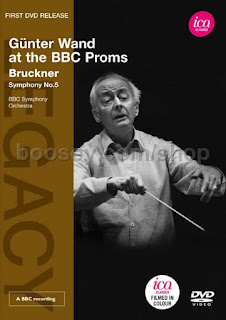 Buy from:
Günter Wand's Indian summer is surprisingly well documented on DVD, and this Bruckner 5 from the Proms follows similar video releases of the 6th, 8th and 9th Symphonies from the same period with the NDR Sinfonieorchester. But Wand's conducting technique, and the aura that he projects from the podium, make each of these well worth watching. Even from audio-only recordings, it is clear that Wand was a living embodiment of Bruckner's art, and that impression is all the stronger for actually seeing him at work.
When this was filmed, in 1990, Wand was 78 years old, and he certainly looks his age. His profile at the podium is as distinctive as any, with his shock of white hair, the pronounced hunch to his back and his long, old-fashioned tails. His baton technique is, for the most part, traditional, and from a technical point of view his conducting is flawless, with every downbeat and every entry clearly indicated. His left hand is busier than his right, carefully shaping the dynamics and phrasing in almost every passage. The emotional complexity and substance of the work are conveyed through Wand's facial expressions, and for all the discipline and rigour in this reading, it is clear that he has a deep emotional attachment to every note.
The interpretation is classic Wand, and is as coherent, dramatic and emotive as any of his recorded Bruckner readings. The BBC SO are on good form, and their ensemble and intonation are close to flawless. Their sound quality however leaves something to be desired. The strings often sound brittle and the brass have an uncomfortable edge to their tone. This is where the performance falls short of Wand's more famous audio recordings of the work, with the Berlin Philharmonic and the WDR, both of which present very similar interpretations, but with orchestras known for their superior tonal control.
To be fair, the quality of the recording doesn't help the orchestra, nor of course does the catastrophic Albert Hall acoustic. The video was made by the BBC, presumably for television broadcast, and although it is 20 years old, it looks and sounds even older. Presumably the BBC never anticipated that the recording would be issued in this form, but even so the sound quality could be far better. The camera work is a little fussy, with more close-ups of players' faces and fingers than are strictly necessary. The great frustration today is that the camera so often moves away from Wand, whose legendary posthumous status now means that he is the only performer here that we really want to see. For some reason, the camera always pulls away about three seconds before the end of each movement, so we are denied the chance of seeing how Wand affects his impressively definitive endings.
An interview with Wand is added as a bonus track. The cover says it was with Michael Berkeley, who doesn't appear, but who must presumably have been speaking German, as Wand himself does. It is just three minutes long, but is well worth see. Wand states very succinctly that powerful Bruckner interpretation is achieved by always thinking about the overall structure and by doing exactly what it says in the score. Berkeley doesn't press him on which of his contemporaries he thinks takes liberties. But Günter Wand was such a gentleman, it is hard to imagine him naming names.