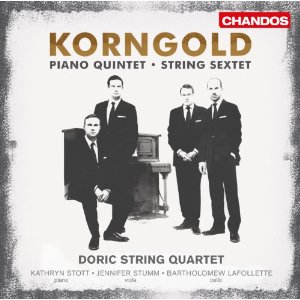 Buy from:
The Doric Quartet seem to have a Midas touch and any repertoire, however obscure, they commit to disc comes out sparkling. This is their second Korngold release, following an earlier disc of the composer's String Quartets. Praise for that recording was universal, and this one looks set for a similar reception. Given the rapid ascent of this group's reputation, they could be forgiven for cashing in on the core repertoire. If they were to record Beethoven's Quartets, for example, the results would no doubt be among the best on the market and would certainly sell as such. But that's not their style, and the group's commitment to exploring neglected works is all the more admirable for the fact that, commercially speaking, it is wholly unnecessary.
Just from rough calculations based on the dates given on the back of the box, Korngold was very young indeed when he wrote these two works. They date from his teens and early 20s, but both sound so thoroughly mature that you could mistake them for the work of a composer twice his age. Perhaps the answer lies in the artistic milieu of his times. This is, after all, music from the end of a long and legendary era of Viennese Romanticism, and it is as if the musical wisdom of Beethoven, Brahms and all their followers has been distilled into the musical persona of this young composer. Direct influences are difficult to spot, which is all the more surprising given the composer's youth. Korngold has moved further from Brahms than many of his contemporaries. The chromaticism and free-flowing counterpoint of Schoenberg's expressionism play a part in Korngold's aesthetic. Richard Strauss is also a continuous background presence. The Adagio of the Sextet, for example, opens with a bold two chord statement of a minor chord followed by its tonic major, just like in the opening of Also sprach Zarathustra. Also, like Strauss, Korngold tends to focus the sophistication of his music in the identity and contours of his themes rather than in their elaboration. Not that he shirks his responsibilities in terms of musical development. In fact, he has a rare ability to construct complex contrapuntal textures from his themes without ever making the music sound dense of over-saturated. That makes both works much easier on the ear than, say, Verklärte Nacht or even the Brahms Sextets.
The Piano Quintet Op.15 is in three longish movements, and their very length highlights another strength of the young Korngold's art. There is so much variety incorporated into this music, yet everything fits seamlessly together as a logical an integrated whole. The way that calm interludes interrupt the momentum of the outer movements, briefly transporting the listener into some plane outside of time, that's a thoroughly symphonic trait and it owes much to Mahler. The second movement is a set of variations, but again the music's continuity has the effect of integrating each of these sections into a continuous progression.
The performance and recording are first rate. The Dorics have found an ideal collaborator in Kathryn Stott, who has no apparent difficulties with the music's many technical demands and who fits seamlessly into the ensemble. That is part of Korngolds's plan, I suspect, and he never writes anything that might set the piano in opposition to the strings. In fact, he often uses heavy pizzicatos from the string players to imitate the attack of the piano. This, and many other of Korngold's textural devices, work all the better for the Dorics' assertive but always precise and controlled playing.
Listening to the String Sextet, it is unclear exactly why Korngold chose to use so many instruments. Unlike Brahms, he is not interested in what bass-heavy textures can do for his chamber music. And unlike Schoenberg, he is not after richly-saturated, enveloping textures. Counterpoint is a continual preoccupation, so perhaps the extra players are used simply to provide extra melodic lines. Whatever the answer, there is a surprising lightness about much of this music. As with the Quintet, there is impressive variety too. Perhaps it is not quite to the same compositional standard as the later work, but it's certainly close, and if you didn't know, you'd never guess that it was the work of a 19-year-old.
Again, the Doric Quartet works with collaborators who are clearly well up to the task. Violist Jennifer Stumm and cellist Bartholomew LaFollette have no problems fitting into the ensemble, which is all the more impressive given that Korngold regularly writes passages in unison and octaves, the sort of textures that routinely catch out even the best groups. The interpretation is just as flexible and lively as in the Quintet. Korngold has plenty of surprises up his sleeve in this score too, and the players make an excellent job of switching between styles and moods as the music requires, yet never letting any of these changes affect the continuity of the whole.
As with previous Doric Quartet releases on Chandos, the sound quality is excellent, clear and detailed but also immediate and involving. A louder piano sound could be justified, although in the context of this interpretation the balance seems fine. Similarly with the bass in the Sextet, we could hear more from the bottom of the texture, but instead the engineers have gone for an even response across the range, which better matches Korngold's finely balanced textures.
Even by the Doric Quartet's now well-established standards, this is an impressive release. Hopefully the obscure repertoire won't put off potential listeners, as playing of this standard deserves to find the widest possible audience.