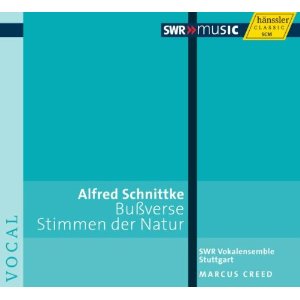 East meets West in the music of Alfred Schnittke. The composer's Slavic and German roots led him to explore musical traditions from both sides of the iron curtain, and often to bring them together in mutually illuminating ways. But even he conceded that choral music traditions rarely mix. As a result, he recommended that his works based on Catholic liturgy, the Requiem and the Second Symphony, should ideally be sung by Western choirs, while his Orthodox inspired works were best suited to Slavic choirs.
The Psalms of Repentance (known here as Bussverse) fall squarely in the second category. The work was written in 1988 to celebrate the millennium of Christianity in Russia. It takes Orthodox choral traditions and intensifies all the latent emotion by applying a searing dissonant harmonic language. I think it is one of the composer's many underrated masterpieces, a piece that sits in a curious and tangential relationship to his better known Choir Concerto, but that demonstrates an even more profound and emotional response from the composer to the music of Orthodox liturgy.
Marcus Creed and his SWR vocal ensemble are one of the few professional choral outfits willing to tackle the dissonant choral repertoire of the 20th century. Their earlier disc of Jolivet choral works demonstrated a positive relish from the singers for the technical challenges that close harmony dissonant textures pose. It is surely this, rather than any anticipated lack of interest from listeners, that has prevented the Psalms of Repentance from being recorded and performed as often as the Choir Concerto, a work which has now firmly established its place in the repertoire.
This is the third commercial recording of the Palms of Repentance. The first two are from the Danish Radio Choir and the Swedish Radio Choir respectively. The Swedish version, under Tonu Kaljuste (ECM 453 513-2) is an exceptional disc and is to be highly recommended to anybody with an interest in Schnittke or in recent developments in Orthodox choral music. This SWR recording isn't quite in the same league, but it offers a different approach on the work, and is well worth hearing in conjunction with Kaljuste's version.
The Swedes really go for a Slavic liturgical sound. So there is plenty of resonance, plenty of space between the phrases, and while the choir is mixed it is the bass voices that dominate throughout. Creed and his SWR forces take a more analytic approach. The tempos are stricter and consistently a notch faster too. The balance is more even between the voice groups. The choir is, I think, smaller, allowing the details of the choral counterpoint to come through better.
The attitude toward the many dissonances in the score is also very different. Kaljuste is happy to treat the more astringent harmonies as suspensions, always anticipating resolution, even when none comes. Creed, in contrast, makes the most out of each of these unusual chords, treating them as a kind of sonoristic basis for the work's harmonic identity. So the dissonant chords are often emphasised, and are always very precisely and evenly pitched, allowing the listener to dissect their mismatched internal intervals.
The result is a recording that emphasises the uniqueness of this remarkable score. The tensions within it are brought to the surface, raising all sorts of questions about the work's genesis and the meaning of the negative emotions that the music repeatedly returns to. Kaljuste does that too, but by highlighting the liturgical nature of the music, presents the dark side of the score more as a series of transient doubts in a religious context otherwise infused with hope.
Voices of Nature is the ideal filler, not least because it picks up almost exactly where the last movement of the Psalms of Repentance leaves off. Creed and the ladies of his choir have no trouble creating a sense of atmosphere here, and Schnittke gives them a helping hand by crowing their harmonies with a halo of overtones on a vibraphone. This is another fine performance, although it adds little to what is already available on disc.
But the Psalms of Repentance are given a genuinely new appearance on this recording, and it is well worth hearing as a result. Unlike most Modernists, Schnittke's music really needs interpretation. As a result, there is a great deal of scope for multiple readings of his greatest scores. This one isn't quite as convincing as the Swedish Radio Choir version, but it is a viable and distinct alternative, and the comparison of the two puts the work in a fascinating new light.