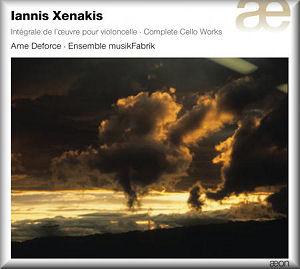 Buy from:
Iannis Xenakis had a natural affinity for numbers and mathematical concepts, but his relationships with musical instruments were a little more complex. His works for solo instruments usually fit under the fingers, but their idiomatic qualities are rarely based on a deep understanding of the repertoire. Xenakis also had a perverse interest in creating technical difficulties for players to negotiate. And you don't do that by just writing lots of notes, it takes a real understanding of what is possible to play and what is not if you are planning to position your music squarely on the border between the two.
The works on this disc span the second half of the 20th century and give a taste of every period in Xenakis' career. The quality and interest peak in the 1960s and then go into slow decline. The most famous work on the disc, and deservedly so, is Nomos Alpha written in 1966. This is one of Xenakis' greatest masterpieces and by any estimation deserves a place among the top few cello works of the 20th century. The mathematical principles on which it is based are derived from successive projections of a rotating cube. Or at least I think that is what's going on, the liner notes are mercifully vague when it comes to the technical end of things. But you don't need any knowledge of maths to enjoy this. As with many of Xenakis' string works, Nomos Alpha calls for heavy scraping on the strings and includes lots of tremolo glissando. So the music is always in a state of flux, either from the continuously changing pitch or through movement across the continuum between noise and sound. The technical challenges here are just extraordinary. At the end, for example, the cello plays a series of scales in contrary motion on artificial harmonics. The mind boggles trying to imagine the contortions the cellist's left hand must go through to achieve those.
None of the other works on the disc quite match this opening track for invention or originality. The two tracks that follow, Charisma for cello and clarinet and Kottos again for solo cello, are unremittingly aggressive. Xenakis chooses the performance techniques that are going to produce the most abrasive sounds and pursues them doggedly. There is musical interest to be had here, but it takes some work.
Epicycles for cello and 12 instruments is similarly unrelenting. The block chords from the brass here resemble those in Eonta. But that work succeeds because the lack of rhythmic interest in the brass is more than compensated for by the piano. Here the solo cello line also lacks rhythmic invention, as if the composer's interests lie only in his harmonic elaborations. Interesting as they are, they don't make up monotony of rhythm and orchestration.
Roscobeck, a more recent work from 1996, achieves an impressive feat by combining cello with double bass and coming up with a range of musical textures and ideas that justify the pairing. The high quality of the sound reproduction helps to clearly articulate these bass textures. And the balance is kept even down at the bottom, with no extraneous bass amplification, all the better to admire these these strange timbral combinations.
The programme ends with an early work, Dhipli Zyia. This shows another side to Xenakis, one that is closer to Bartók than to the post war avant garde. The piece never quite breaks out into a folksong but always feels like it is about to.
No great technical challenges on this last track, but by this point cellist Arne Deforce has earned the right to rest on his laurels. The cello playing throughout is excellent, especially when you consider the astonishing challenges the composer sets. The cellist, his various collaborators, and the sound engineers all make a good job of the brutal noise-like textures, and the sound of the cello always has a visceral immediacy, even though the microphones are usually placed a reasonable distance back.
The first track of this disc is more than enough to recommend it, and the endless fascination of Xenakis' score repays multiple listenings, especially with a performance and recording of this quality. The other works are only likely to be of interest to already committed Xenakis fans. Although if you really want to get your head around the relationships between higher mathematics and Modern music, this would be a great place to start.