Mercy and Grand: The music of Tom Waits and Kathleen Brennan arranged by Gavin Bryars, Joe Townsend and Jim Holmes. 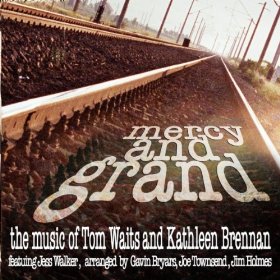 There's only one Tom Waits, and anybody trying to cover his songs does so at their peril. Rod Stewart just about gets away with his imitation of that famous gravelly voice, but most others avoid the Tom Waits sound and instead transplant his tunes into other musical contexts. Gavin Bryars and the musicians of Opera North do a little of both. The vocals here are supplied by the very operatic and very English mezzo, Jess Walker, while the band is much like Waits' own, with a tinny piano, string bass and a handful of wind instruments.
The album is a spin-off from a full length concert, originally given in Leeds in 2007 and later presented at festivals around the country. The programme is bolstered with arrangements of other songs, most notably those of Kurt Weill. The Weill arrangements are all of songs that Tom has himself has sung, and the instrumentation always makes reference of one sort or another to the Tom Waits Band.
The results are a mixed bag, but the hits outnumber the misses. Jess Walker is at her best in the more brazen and sardonically unbeat numbers like A Little Drop of Poison and Innocent When You Dream. An operatic vibrato comes though on the longer notes here, increasing the projection, but moving the sound even further from original. One or two of the songs are performed in keys that take Walker right into the top of the soprano range. That adds another level of creepiness some of the songs, particularly Poor Edward. The slower, maudlin numbers are hit and miss. Broken Bicycles and Alice both work because the no-nonsense delivery matches the directness of the lyric. But with Johnsburg Illinois, the sheer simplicity of the music proves its downfall, and it becomes clear just how much the success of the original relies on the timbral complexity of Waits' voice. A clash of cultures also causes some of the songs to jar, and lines like 'A little rain never hurt no-one' sound very strange sung a plummy English accent.
Most of the arrangements are by Gavin Bryars, but one or two are by Joe Townsend and Jim Holmes. The stage band is so similar to Tom Waits' own backing group that it is often hard to work out exactly what the arrangers have done. None of the instrumental effects are particularly subtle, but most fit well into the respective songs. Poor Edward is accompanied by musical saw and bass clarinet, a bizarre but effective combination. In other songs, Stroh violin is put to good use, as is the harmonium. But contributions from the sax and electric guitar can sometimes take the sound a little too close to the Rock and Roll aesthetic for comfort.
As well as arranger, Bryars features on the disc playing the double bass. He's well amplified, so anybody interested in this side of the composer's art should have a listen. He makes a particularly memorable contribution to Alice, with a solo at the beginning followed by some wonderfully free-flowing bass lines. The only track that sounds like Gavin Bryars doing his own thing is The Briar and the Rose. Here Bryars takes Waits' instrumental number and adds some of his trademark mood-music minimalism. So for a few short minutes toward the end of the album we are briefly taken into the world of The Sinking of the Titanic and Jesus Blood. It's a great track, but sadly all too short.
A brave effort then, from Bryars and his Opera North companions. Particularly brave, in fact, from Opera North considering how far this project takes them outside their comfort zone. Among Tom Waits covers, these are as good as any, but they're still no match for the real thing. So if you'll excuse me, I'm off to reacquaint myself with Swordfish Trombones.