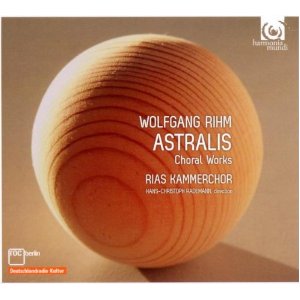 
There are so many facets to Wolfgang Rihm's compositional output that it is very hard to keep up. The works on this disc are only a sample of his choral output, but they reveal a side to the composer that you could little imagine if you only know his name from orchestral or chamber compositions. Rihm, it turns out, was raised a Catholic, and his earliest musical experiences were singing in the Karlsruhe Oratorio Choir. The last work on this programme, Fragmenta passionis, dates from 1968 when the composer was just 16 years old. The choir had clearly been singing the Bach Passions, and Rihm had clearly thought to himself that he could do his own version, at least of the crowd scenes. Sieben Passions-Texte is a much later work from 2001-6. That sets it directly after the Luke Passion in the composer's output. The liner note, informative as it otherwise is, does not discuss the relationship between these two works, which on the face of it would seem to be closely linked. In fact, these Passion Texts are very different to the preceding Passion proper. There is little drama here, and the choir is made up of only six voices. It is clearly a very different and more intimate response, albeit to the same subject.
All three works use a harmonic language which is rarely heard in Rihm's instrumental music. The music is atonal, at least at the structural level, but rarely outright dissonant. Rihm uses triads and other consonant combinations, juxtaposing them in environments with no apparent tonal centre. This allows him to delicately control the balance between individual voices and the homogeneous whole, with every texture sitting somewhere between these two extremes. Sieben Passions-Texte is a sophisticated and contained work, its level of musical discourse on a par with that of the early German Baroque. The individual movements are short and repay multiple listenings. This is Rihm at his most reserved. Perhaps piety is the cause, although that seems unlikely. And why did such an aphoristic piece take Rihm, a famously fast-working composer, five years to write? On the surface, this seems the most straightforward of works on the disc, but you don't have to dig very deep before you meet a whole range of paradoxes.
Astralis is the third in one of Rihm's many cycles of works, this one entitled Uber die Linie. It takes the choir to the very extremes of tempo and dynamics, demanding the slowest and quietest performance possible for almost the whole of its continuous half hour duration. Minimalism has clearly been an influence here, particularly that of Morton Feldman. But Rihm is never one to abandon logical progression in favour of atmosphere or mood, and the intellect underlying this music is always apparent. The texts, by Novalis, dictate, or at least inform the structure, with the four stanzas, each of long but variable length, separated by interludes from cello and timpani. Again, the harmonies are open and approachable, but never tonal in the traditional sense. Rihm often adds in slightly sour intervals, tritones and major 9ths, to punctuate the textures. But he never dwells on them, and eventually each disappears back into the consonant whole.
Fragmenta passionis is an extraordinarily accomplished work for a 16 year old. It is experimental, but in all the right ways. The movements are short, and each presents a single musical texture, all of which are innovative, or at least were in 1968. Unsynchronised chattering whispers are one of the effects he tries out, and there lots of glissandos going on too. It is music very much of its time, although while there are similarities to the music of Ligeti and Berio, it is difficult to draw any specific lines of influence.
The Berlin-based RIAS Kammerchor gives excellent performances of all three works. The liner note stresses the difficulties posed by Astralis, but the tuning, balance and tonal control remain impeccable throughout. The engineering is good too, giving us just enough of the acoustic from the Jesus-Christus-Kirche to warm the sound without compromising the clarity. Astralis clearly posed problems in post-production, namely that the continuous and exposed textures gave nowhere to hide the cuts between takes. One or two of these remain apparent, although not to the point of distraction.
Even by Harmonia Mundi's standards, the packing here is very beautiful. The wooden sphere on the front cover is also printed on the top face of the CD, a nice touch. All round, this is a very impressive contribution to the Rihm catalogue. No doubt it is just one of many discs of his work that will be appearing in this, his 60th year, but it is unlikely that many others will be as well produced or innovatively programmed as this one.