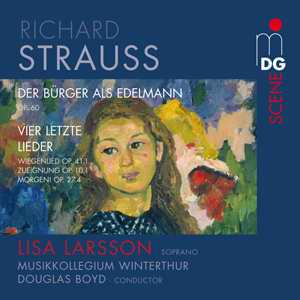 
Strauss' middle period was dedicated almost elusively to opera, so his incidental music for Le Bourgeois gentilhomme offers orchestras a rare opportunity to savour the refinement and panache of his neo-classicism in the concert hall. The music is fairly straightforward, but some of the orchestration is unusual, and the small ensemble requires a particularly acute sense of stylistic engagement to balance the tastes of 17th century France with those of early 20th century Germany.
The Musikkollegium orchestra from Winterthur in Northern Switzerland may be in the ideal position to do just that. There is plenty of life and bounce in their reading of the suite. Strauss himself worked with this orchestra, and they have clearly maintained strong links with his music.
The Suite appears here in its nine movement form, and is therefore more complete than on some recordings, although the two dances added in 1917 are omitted. It is difficult to decide if the orchestra has been reduced to the dimensions that Strauss stipulates. If we are hearing a string section of just 16, then the players are giving an impressively large and round tone, and the acoustic is unusually supportive. Whatever the size of the orchestra, some of chamber-like intimacy of the theatre orchestra is lost in this more symphonic approach.
Fortunately, the variety of styles, tempos and textures survives this more expansive reading. Despite the resonance of the hall, the microphones do a good job of focussing in on the more unusual instruments, particularly the bass trombone and the piano. So even though the Winterthur forces offer a lusher sound than the music usually receives, all its quirks shine through.
The Four Last Songs are even better represented in the catalogue, but it seems unlikely that recordings of them are going to stop appearing any time soon. The Swedish soprano Lisa Larsson sings them with a focussed and precise tone, developed through her earlier work in Baroque opera. She has a slow and shallow vibrato, which imparts the longer phrases an impressive sense of tonal coherence. The balance between singer and ensemble is ideal, and the orchestra never seems obliged to reduce the colour or variety of its sound for the sake of accompanying dynamics.
However, Larsson has some tuning problems at the top, and in particular a tendency to go sharp on the louder, higher notes. That's frustrating given the accuracy of everything else about this recording. The ordering of these songs is also puzzling. As well as the Four Last Songs, we also hear Wiegenlied Op.41/1, Zueigung Op.10/1 and Morgen! Op.27/2. The latter is placed after the Four Last Songs, which may make programmatic sense, Morgen following Abend, but seems illogical from a musical point of view. Otherwise, this is a disc well worth hearing, if not the top choice for any of the works presented.