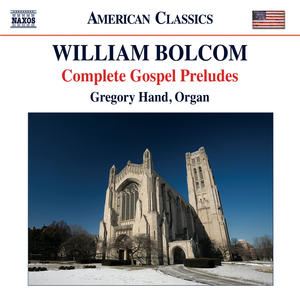 The word 'eclectic' doesn't even begin to describe the music of William Bolcom. Seemingly unrelated musical ideas collide in his works with alarming regularity, but also with an underlying logic that allays any suspicion of randomness. He is one of the few postmodernist composers to take ideas of collage and pastiche into the organ loft. We expect more reverential music to come from the pipe organ, but the skill and humour with which Bolcom mixes his styles and genres gives him considerable leeway to explore the instrument's lighter side.
The Gospel Preludes, which run to four volumes, began in 1979 following a commission from the Dallas chapter of the American Guild of Organists. The genre is, of course, based on that of the Baroque chorale prelude. Like Bach and his colleagues, Bolcom freely harmonises his themes, sets them against descants, and extracts motifs for extended contrapuntal elaboration. His lingua franca is a dissonant harmonic style with quasi-improvised melodic lines. The gospel tunes provide the levity to balance this sometimes austere atonality, and jazzy syncopations give the rhythms drive and lift. Bolcom is happy to disguise his sources, often to the limits of recognisability, as in the case of Sometimes I Feel Like a Motherless Child. But other themes cry out for triumphal exposition over full organ accompaniment, which is exactly how we hear Amazing Grace and Rock of Ages.
Gregory Hand plays the ideal instrument for this repertoire: the Skinner Organ of Rockefeller Memorial Chapel at the University of Chicago. This is a vast instrument its registration alone takes up a full page of small print in the liner but its range of colours and its sheer power are exploited to the full. The organ even has a set of bells, which make a brief appearance in Shall We Gather at the River and are then given a starring role in Nearer, My God to Thee, where they intone a continuous ostinato throughout the prelude. Hand clearly has command of this huge instrument, with only a few poorly timed jerks on the swell pedal suggesting that he could occasionally do with more than four limbs.
Sound engineering is by the German/American organist Wolfgang Rbsam. He knows this instrument as well as anybody, having spent most of the 1980s and 90s as the chapel's organist. Even so, giving clear voice to all of the organ's many registers is a huge task, and in many of the quieter passages the sounding pipes can seem frustratingly distant. Nevertheless the acoustic, resonant as it is, never obscures and gives the recording a valuable sense of space.
Bolcom's Gospel Preludes have been a staple of the American organ repertoire since their completion in the mid-1980s, yet this is their first commercial recording. It's unlikely to be the last though, and Gregory Hand has set a high standard that his successors may struggle to match.