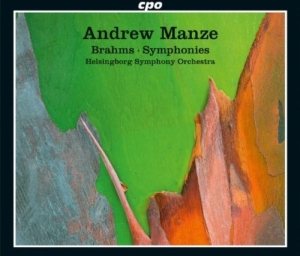 We live in post-h.i.p times. That's post historically informed practise to you and me, the term Andrew Manze uses to describe his Brahms interpretations. But he's hardly alone in that approach, Norrington, Harnoncourt, Mackerras and Gardiner have all performed Brahms with modern orchestras but using ideas from the period performance world. And all seem to have moved on further from h.i.p. dogmas than Manze, whose loyalty to the letter of the score and unwillingness to apply rubato occasionally make him seem positively reactionary. Evidently it's post-h.i.p. to be square.
Nevertheless, these recordings have much to commend them, and Manze achieves his goal, whether h.i.p. or post-h.i.p., of breathing new life into works stifled by their own performance traditions. Manze discusses his approach at length in his liner note. He comes over as erudite but makes no excuses for his occasional idiosyncrasies. Other scholars and conductors have been through the source materials before, but Manze has found new insights by studying the composer's own piano duet arrangements, which have many phrasing marks that didn't make it into the orchestral scores. Manze also traces the gradual changes in Brahms interpretation through the 20th century, his aim to extrapolate back to Brahms' own time in the hope of capturing something of the original feel of the works. Of course, these days everybody knows that's a fool's errand, but the musical insights that result make for satisfying listening, whatever the historical veracity of the approach.
In terms of tempos, Manze contends that the allegros have gotten slower and the adagios faster over the years. There has also been, he suggests, a huge increase in the amount of rubato applied, and since Brahms himself wrote not to slow up unless the score says so, Manze is surely justified in his more austere approach.
The effect is to bring out the Classical character in this music. You'll often hear echoes of Beethoven and even Mozart that don't come through in more liberal interpretations. In the first movement of the First Symphony, for example, the music is fast and steady, creating a sense of inexorable, tragic and even fatalistic momentum. And in the first movement of the Second, the trombone chorales sound for all the world like the graveyard scene of Don Giovanni.
Critical reaction so far has been surprisingly uniform in its praise. I'd anticipate a little more disagreement among listeners as these recordings become better known, as they surely will be. Comparison with Harnoncourt or Gardiner reveals a slightly modular feel to Manze's structuring. When you hear Karajan's Brahms, it always flows, with the phases seamlessly weaving together. That's an approach that most in the post-h.i.p. world have maintained, but it requires more rubato in the transitions that Manze will permit himself. The result is a greater focus on the moment.
Fortunately then, the Helsingborg Symphony Orchestra ensures that every moment in these recordings is worth focussing on. The balance is excellent, a result perhaps of Manze going for a moderately sized string section. Vibrato in the strings is present but minimal, while the woodwind soloists are permitted a little more wobble. The constrained tones of the horns and trombones contribute most to the 19th century atmosphere of the orchestral sound. The SACD audio is excellent, and the recording really benefits from the warm but clear acoustic of the Helsingborg Concert Hall.
Something different, then, to add to your Brahms collection. Manze pursues his aesthetic ideology quite doggedly here, but never to the expense of the results. He's too much of a professional to let his scholarship ever stand in the way of his intuitive musicianship, which must surely have played just as big a role in the formation of these interpretations. When you go back to to your Karajan, or your Bernstein, or even your Carlos Kleiber, after hearing this, nothing will seem quite as inevitable or beyond dispute. But who knows, you might end up liking those earlier interpretations all the better for hearing them stand up to a thorough challenging.