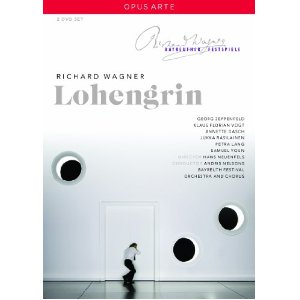 Rats! Thousands of them. If you've only heard one thing about the Hans Neuenfels production of Lohengrin at Baryreuth, it is undoubtedly the fact that he infested the stage with vermin. Neuenfels is known for his radical takes on familiar works, and the rats have certainly helped him maintain that reputation. But as the DVD of this production reaches our shores, it becomes clear that there is much more to it. The director adds a strong political dimension to the piece, but not at the expense of the actual story, which is presented and explored with surprising loyalty. The result is a production in the best Regie tradition, offering a range of new angles on the work and providing a handful of clearly thought visual ideas to enhance its message.
But impressive as the staging is, the most remarkable aspect of this Lohengrin in the music. Latvian conductor Andris Nelsons was only 31 when he first took the baton for this staging. The DVD was recorded in 2011, the production's second year, by which time he had clearly mastered the various acoustic anomalies of the Bayreuth pit to create a musical interpretation that is among the finest on record. Nelsons is strict with the tempos when he needs to be, sometimes nudging on the various transitions and modulations to maintain the momentum. But all the magic remains. He draws a range of expansive and luscious sounds from the orchestra, particularly the woodwinds. And, most importantly, he gives the singers the space they need to embody each of their characters within the music.
It helps of course that he is working with a dream cast. In this second year of the production, two new singers were brought on board: Klaus Florian Vogt replaced Jonas Kaufmann in the title role and Petra Lang took over the part of Ortrud from Evelyn Herlitzius. It is a shame not to have heard Kaufmann's Bayreuth début, but we should be grateful of any opportunity we get to hear Vogt sing Wagner. His simple, unaffected tone surely finds its ideal vehicle in Lohengrin, and even within this strong cast he makes sure that, musically as well as dramatically, the hero is in charge.
Annette Dasch was a surprise choice for Elsa the first time round. Not only had she not sung the part before, but she had never Wagner before either. But the gamble paid off, and her bright, clear soprano proves ideal for the role and the ideal complement to Vogt's similar tone. For all Neuenfels' efforts to make this a more mobile production, there is still a lot of stasis in many scenes. But Dasch acts with her huge eyes, so it really doesn't matter that she's rooted to the spot for scenes on end. Georg Zeppenfeld has a similar approach to the part of King Henry. In this production, the king is represented as weak and indecisive, and again all the characterisation for the part is represented in Zeppenfeld's facial gestures. He is a very young singer to be taking on the part, which also helps to convey the sense of compromised authority. He could do with a little more weight in the bass register, although this too serves to convey the characters weakness. Petra Lang puts on an abrasive and unattractive tone in the role of Ortrud. I say 'puts on' as she is clearly capable of more elegant sounds. But characterisation is all, and this penetrating, angular sound is just what the part needs.
And so to the rats. Neuenfels and his stage designer Reinhard van der Thannen devise a scenario in which Brabant is an animal testing laboratory. The chorus (but not the leads for some reason) are depicted as lab rats, with experiments conducted on them and various points in the story. Political repression is of course the point of this allegory, although Neuenfels makes that idea considerably more subtle through his similarly weak and subordinate King Henry. There are some elegant Watership Down-like animations involving the rats, which are more difficult to interpret but which considerably reinforce the iconography. 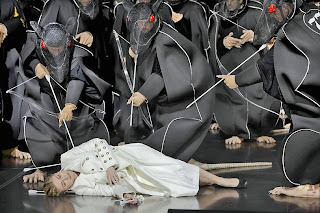 So far so controversial. But the curious thing is that, with the exception of the rats, almost everything else in this production is conventional. The leads wear unassuming modern dress. The swan offers any director of this opera a range of opportunities for symbolic representations, and Neuenfels takes up as many of these as any of his colleagues might. The interaction between Lohengrin and Elsa is explored at length, and presented as a much more troubled relationship than in most productions, which under the circumstances seems appropriate. One of Neuenfels' great strengths is his musical literacy. This comes across in the way he paces the action to build up to the climaxes at the end of each act. That works best in Act 2, where the wedding scene is as visually powerful as the music. Neuenfels saves up a nasty little shock for the conclusions of each of the outer acts. The one at the end of Act 3 (I won't give the game away) is even more disturbing than the rats, but will leave you scratching your head as to what exactly it means.
The video production is well conceived and undistracting. Unlike the Meistersinger DVD from Bayreuth the previous year, there are no hidden cameras in the sets or tight closeups of faces. Instead there are just a few cameras secreted around the proscenium arch, including one high above the stage and one in the prompt box. The high angle shots are good for the chorus scenes, and the movements of the rats seem much more rat-like from above.
The extras on the DVD include those Watership Down animations again and a series of five minute interviews with Katharina Wagner, Neuenfels, Vogt and Dasch – a reasonable offering. Interviews with irate audience members might have been more fun. Katharina says in her interview that, in this second year, the audience was much more accepting of the production. It's all relative of course, and considering the 2011 festival opened with Sebastian Baumgarten's even more controversial Tannhäuser, the audience were probably taking the lab rats in their stride by this point. That said, there is a nice touch in the editing of the applause at the end of Act 1. Somebody manages to get a very loud boo in just before the clapping starts, and this is left on the soundtrack. A small reminder of the controversy this production courted the first time round.