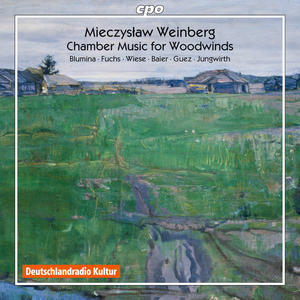 The fascinating and diverse music of Weinberg was once an unkown quantity. Not any more though, as a range of adventurous labels have embarked on recording projects to bring his work to a wider audience. But there are still plenty of surprises to be found, especially among his chamber works.
This selection, curated and accompanied by Elisaveta Blumina takes a roughly chronological approach to Weinberg's works for solo woodwind. That's a sensible policy, as his more accessible early compositions offer a valuable handle on the more opaque style of his later years. Most listeners come to Weinberg's music in the knowledge that he was a close associate of Shostakovich. The two composers certainly influenced each other's work, but Weinberg always retained a distinctive musical personality, and moved progressively further from Shostakovich's shadow as the decades went by.
Or that's the narrative this album follows. The Clarinet Sonata with which it opens was written in 1945, around the time the two composers first met. The Sonata mirrors the angular lyricism of Shostakovich's war era works. A tension is felt between the soloist and the piano, with the clarinet singing out its melodic lines, while more sinister forces lurk in the piano part. Repeated pedal notes from the piano's left hand recall Shostakovich’s more militaristic style, and when the piano shadows the clarinet's line many octaves below, a similarly sinister mood results.
It's not all doom and gloom though. The other famous fact about Weinberg is that he was in touch with his Jewish roots, so listeners coming to his Clarinet Sonata can justifiably expect to hear some Klezmer. That comes through in the high-register lines for the clarinet, the instrument's astringent tone balanced by some light, lilting rhythms.
The '12 Miniatures for Flute and Piano' have a combined duration of 17 minutes, yet each of them contains enough material for a sonata movement. Weinberg switches from one mood to another with deceptive ease, allowing each of these short vignettes a remarkable autonomy. But the work as a whole also holds together with a paradoxical unity that is difficult to define in formal terms. Flautists often complain that their recital repertoire is meagre, so this piece, virtuosic as it clearly is, may offer them some salvation.
The programme then jumps 35 years to 1981, when Weinberg composed his Sonata for Solo Bassoon. Yet again, the composer defies the odds that his chosen genre sets him, producing more than 20 minutes of solo bassoon music of continual fascination and interest. Music for solo bassoon always runs the risk of unintentional comedy, but Weinberg's mastery of his musical rhetoric ensures that, even in the lighter passages, we always laugh with him and never at him. Both the Bassoon Sonata and the Flute miniatures belie their technical difficulties through their relatively conservative style. The music is diatonic, but that doesn't mean it is easy to play. The regular extremes of dynamic and tessitura make that point explicit, but it is still easy to listen to the disc from one end to the other without fully appreciating the challenges the players have been put through.
The virtuosity of the players themselves must surely play a part in this, and also in the drama and engagement that each of the works achieves. The players also show remarkable restraint when the music requires. Those passages in the Clarinet Sonata, for example, that approach Shostakovich at his most symphonic, remain resolutely chamber music: evenly paced, well balanced, and with dynamics and accents never taken to extremes further than the music permits. The quality of the recorded sound is also a credit to the project, with each the solo instruments given immediacy and clarity and the piano ideally balanced and positioned within the stereo array.
The concluding work, a Trio for Flute, Viola and Harp, is the most problematic, at least to my ears. This later style of Weinberg's uses the same musical devices as before, angular rhythms, repeating ostinatos, diatonic lines that move freely between tonalities, but the direction of the music is more difficult to follow, and the function of its constituent parts never becomes clear. It is going to take me a little longer to get comfortable with this late music, but I'm looking forward to doing so in the company of these enthusiastic and persuasive advocates.