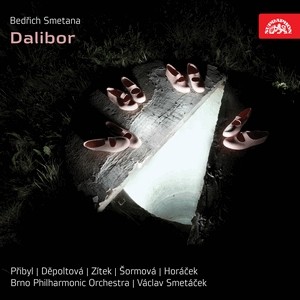 For all its fame, both in the Czech Republic and beyond, Dalibor is poorly served by commercial recordings. There seem to be about half a dozen on the market, but all are blighted either by poor casting or low hi sound. This new issue, of a 1979 recording under Václav Smetáček, isn't ideal, but at least it does the work justice. The Czech cast all have a real affinity for the music, and while none of their contributions is stellar, the consistent standard across the board aids the coherency of the result. The sound quality is not to the highest standards either, even for 1979, but the digital re-mastering is sensitively done.

The opera itself is a curious mix of Czech nationalism and Germanic cultural hegemony. The plot, about an imprisoned freedom fighter, is clearly indebted to Fidelio, while the music owes just as much to Lohengrin and Tannhäuser. Complaints have been made down the years about the amount of German influence here, but Smetana integrates these elements well into a work that stands on its own considerable merits. It's well worth hearing without the visuals; especially the military marches and atmospheric scene-changes, which go a long way towards setting the mood and telling the story.
Smetáček gives an expansive reading of the score, energetic but never dictatorial. He allows the singers all the space they need for their arias, and the results are all the more passionate and personal as a result. When Smetana requires careful control from the podium, Smetáček is always ready to deliver. The composer often writes long, even crescendos over the course of one or two phrases, and the even gradation that the conductor achieves always creates the drama the music seeks.

The cast is made up of dependable and confident singers, all of whom expertly balance passionate expression with clarity of diction. Vilém Přibyl sings the title role with an impressively rich tone, although he can sometimes sound a little strained at the top. He really takes advantage of the space that Smetáček gives him for his solo arias, and you get the impression that he has taken full control of the stage every time he begins to sing. King Vladislav is sung by the baritone Václav Zítek. His is a big Slavic voice, which really comes into its own in the lower register. The pick of the female leads is Naďa šormová as Jitka. Her tone is intense but always focused, and her diction is impeccable.

Good singing too from the chorus, which is large but never unruly. The orchestra, the Brno State Philharmonic, are also in their element with this music, particularly in the marches. The balance between stage and pit is good, but the sound quality is far better for the singers than it is for the players. The orchestra often sounds distant, with the higher sounds, the piccolo in particular, frustratingly thin of tone.

If that is the price we have to pay for an otherwise impressive digital transfer, then so be it. The work is still in need of a good quality modern recording, but given the pride the Czech musical establishment takes in its operatic repertoire, that can only be a matter of time. Until then, this version will serve the opera well. Even when new recordings do appear on the market, this one will probably remain the budget version of choice.