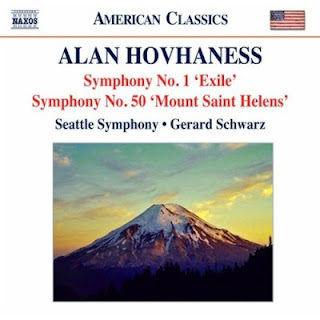 For all the diverse influences on Hovhaness' music, it is worryingly easy to characterise his huge catalogue in just a few sentences. Woodwind solos predominate, and the brass are usually used for quasi-liturgical chorales. The strings are given well-structured but always simple textures. Percussion is used regularly, but strictly for colour. Complexity, such as it is, almost always comes through Fuchsian counterpoint. And a distinctly folk-like flavour is imparted through the use of, apparently Armenian, modal harmonies.
The three works on this disc span a period of over 45 years, yet all those characteristics are as present in the First Symphony of 1936 as they are in the 50th of 1982. Hovhaness settled on a three movement structure for his first numbered symphony, which remained his preferred model throughout his long career. The simplicity of this three movement form reflects the simplicity of the constituent music, and it could be argued that Hovhaness music is hardly symphonic at all, eschewing as it does drama and developmental rigour. Instead, each movement presents a mood, and usually a fairly peaceful one at that.
The First Symphony begins with a beguiling clarinet solo over pizzicato strings and exotic tuned percussion. Further woodwind solos follow, interspersed with brusque interjections from the brass. This texture wouldn't feel out of place in the 50th Symphony at the end of the programme, so for all the talk of successive periods and styles in Hovhaness' output, it is difficult to sanctions notions of development of progression in his style. In the finale of the First, the strings play long, even lines, based on some white-note mode and in strict counterpoint between the parts. To my British ears, this sounds for all the world like Vaughan Williams, but the liner notes assure me that the ethnography points to Armenia.
The second piece takes us even further east. Fantasy on Japanese Woodprints dates from 1965, soon after the years Hovhaness spent travelling in Asia. It is a concertante work for marimba (ably performed by Ron Johnson) and orchestra, the tuned percussion seemingly intended to imitate the Japanese koto. There are some fascinating orchestral textures here, for example the trombone section playing a melody in unison over a marimba obbligato. But, as with all of Hovhaness' work, the resulting textures are very straightforward and always clearly delineated.
The 50th Symphony is named 'Mount Saint Helens' after the volcano that erupted in Hovhaness' adopted Washington State in 1980. Given the serene and orderly style that predominates throughout the composer's work, it is difficult to anticipate what he will do to represent such an event. The answer is: lots of percussion. The results are effective, and certainly dramatic, but always retain that clarity of texture and simplicity of line. The first two movements represent the calm before the storm, or rather the mountain when it was still a tranquil forested idyll, and the geological forces beneath it were still dormant. The predominantly string based textures of the first movement are accompanied by a repeated figure from the celesta that sounds uncannily like a mobile ring tone. Had the piece been written 20 years later, the composer may have thought twice about using this effect, inadvertent as the association of course is.
The recording, by the Seattle Symphony under Gerard Schwartz is excellent in every respect. All of the woodwind principals make the most of their solos, the unity of the strings is exemplary, and the balance between percussion and ensemble is ideal. The recording first appeared on the Delos label in the early 90s, and is now reissued on Naxos thanks to one of those close business alignments that the latter company is so good at. The clarity of the recorded sound is impressive, and is all the more valuable for the directness and simplicity of Hovhaness' orchestral textures, which get every chance to shine here. No doubt Naxos have a good number of further recordings of this composer’s music lined up for reissue. I await them with great interest.