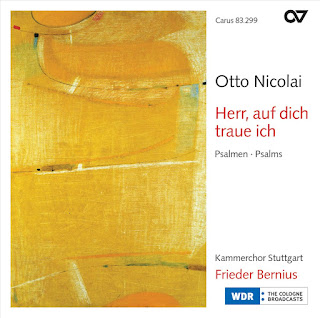 You thought Otto Nicolai was just an opera composer? Think again. It turns out his day job for most of his short career was as a cathedral music director in Berlin, a position he inherited from Mendelssohn. And listening to the liturgical choral music presented here, most of it in premiere recordings, it is easy to hear stylistic connections with Mendelssohn's work. As a result, Nicolai takes on a role as choral composer similar to that of Ferdinand David in his concertos: the two men providing us with glimpses of what Mendelssohn's career may have been like had he lived long enough to produce a more substantial body of work in either genre.
The programme for this disc begins with excerpts from a full Protestant liturgy, followed by some German psalm settings, and concluding with some Catholic material, an Offertorium and a Latin setting of Psalm 54. The music is Classical in conception but Romantic in execution. Each of the movements is short, and the phrasing and rhythms are all regularly structured. But the contours of the melodies and the occasional richness of the harmonies makes for impressively emotive music, although liturgical function always comes first.
Interplay between soloists and ensemble is an important aspect of many of these works, especially the opening liturgy, where Nicolai sets words usually spoken by the priest as incantations for the soloists, with the full choir singing the responses. Frieder Bernius and his excellent Kammerchor Stuttgart are able to perform tuttis with such unity that the difference between soloist and ensemble becomes one only of tonal weight. Generally speaking, the textures are simple, and the liturgical function of the music means that the words always come first. The music is performed with a similar focus on clarity and articulation. The choir is small but the venue – the Immanuelskirche in Wuppertal – is large. That allows for plenty of atmospheric resonance, but the WDR/SWR engineers ensure that it never obscures the detail, nor those all important words.
The two Latin works at the end of the programme are fascinating. Nicolai visited Rome in 1834 and presumably got a good dose of the Palestrina tradition at the Vatican while he was there. These two works were written after his return (the Psalm very soon after), and show just how much of an impression Palestrina had made. Nicolai follows Palestrina's imitative counterpoint, with ascending passage work passing between the voices. But his polyphony is much more basic, and his harmonies locate this music very firmly in the early 19th century.
Carus are to be congratulated for bringing this fine, although by no means revolutionary, music to light. It turns out, though, that they have an ulterior motive. The label also has a publishing arm, which offers sheet music for all these works. Chamber choirs and church choirs looking for new repertoire may find something of interest here. The Stuttgart forces make this sound easy, although I'm not sure the music is quite as straightforward to perform as the recording suggests. Even so, Nicolai clearly writes with his singers in mind. It's all enjoyable to listen to, and I'm sure it's rewarding to sing as well.