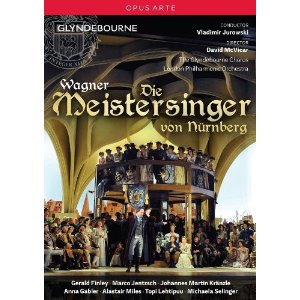 
The Mastersingers took a very long time to reach Glyndebourne. When John Christie founded the house in the early 30s, he had every intention of staging Wagner operas on a regular basis, and putting Die Meistersinger at the heart of the company’s repertoire. Financial pressures soon quashed that dream, but the idea has been quietly simmering on the back burner for the last 80 or so years. Last year they finally managed the impossible, not only bringing Meistersinger to the Glyndebourne stage, but doing so in a production perfectly suited to the house. Now the results are available on DVD/Blu Ray, and are a treat not to be missed.

David McVicar was chosen to direct this historic production. Given the context, he wisely avoided any radical reinterpretations. The action is updated to the early 19th century, which, as McVicar explains on one of the documentaries in the Extras, has two clear benefits. Firstly, it provides an opportunity for costumes and visuals that are more colourful than the dull rags you would need to depict 16th century Nuremberg. But also, the issue of German nationalism can be meaningfully addressed, and in a relatively benevolent light. McVicar’s idea is that, prior to unification, ideals of German identity were just that, aspirations without yet any aggressive or militaristic connotations. In truth, I would struggle to write a meaningful description of this staging that didn’t make it sound politically naïve. But, like all great opera productions, this one creates its own artistic environment and political logic. Compared to Katarina Wagner’s production say, or Uwe Eric Laufenberg’s at Cologne, this staging seems to be in complete denial about the work’s reception history. But then, everybody in the audience knows all about that anyway, so perhaps McVicar is right to imply that the time has come to move on.

The size of the stage, pit and auditorium at Glyndebourne could be seen as a problem for this, or any Wagner opera. But McVicar, and conductor Vladimir Jurowski, make the smaller scale work to their favour. There is a great deal of intimacy in this staging, and the director takes his responsibilities seriously when it comes to depicting dynamic and meaningful relationships between the characters.  That means that everybody in the audience can feel like they are part of the action (I did, and I was sitting on the back row). It also makes the production ideal for video presentation. So too does the lightning design, from Paule Constable, which favours bright side lighting from a low angle, and also ensures maximum visibility, even in the night-time setting of Act 2.

Jurowski’s approach to the music is similarly bright and airy. The size of the pit limits him to a small orchestra, but the only real disadvantage is a lack of string tone (it is a real shame you can’t hear the cascading violins over the last bars of the overture). But an impressive balance is achieved between the stage and the pit, and even the minor problems you could hear in the hall have been adjusted for the recording. If there’s one criticism I would make of Jurowski’s conducting, it is a slightly lack of humour. He takes a symphonic approach, driving the music on and always fitting individual passages into the larger musical logic of each act. That’s good, but there are many occasions when playfulness would be a more fitting virtue, and while the singers can all manage to lighten the mood when required, they often have to compete with the more disciplined tempos they are being directed to follow.

The production is excellently cast. Not all of these voices would be large enough for a Wagner production at a large house, but that doesn’t matter here, and each of the leads brings distinctive and valuable qualities to their respective parts. McVicar says in the documentary that he relished the opportunity to cast younger singers on the grounds that it makes much of the story more believable. That’s certainly true in the cases of Walther, David, Eva and Lena, but perhaps not for Gerald Finley as Sachs. Dramatically, he doesn’t quite know what to do with the part, but from his actions and his facial expressions, that clearly isn’t for want of trying. Fortunately, his singing more than compensates. Finley has an attractive tone, all the power he needs, and all the stamina too.

Marco Jentzsch is a similar case as Walther, an excellent voice but with occasionally wooden acting. But the real highlights of this cast are Johannes Martin Kränzle as Beckmesser, Alastair Miles as Pogner and Anna Gabler as Eva.  Kränzle puts in an ideal comic turn as Beckmesser, routinely stealing the limelight from whoever he shares the stage with. Miles’ Pogner is richly sung and emotively portrayed. And Gabler is a magnetic presence as Eva. She is a singer to look out for. This performance from her is excellent, and combined with her Gutrune in the recent Bavarian State Opera Götterdämmerung , she is clearly a very versatile Wagnerian who we are going to be hearing much more from.

I remember some grumbles at the time of the premiere about Gabler’s singing, but I don’t remember what the specific problem was, and you’d be hard pressed to deduce it from this recording. Personally, I found Topi Lehtipuu weak as David when I saw the production, but perhaps he was just having a bad night, as he sounds much better here.

Even if you saw the live webstream of this production last summer, it is still worth seeking out the DVD. The picture and sound quality are of course far superior, and the postproduction editing has allowed the team to add in a good number of close-ups and cutaways. That is a real boon given McVicar’s attention to detail. So, for example, a discourse from Sachs will include plenty of close-ups of Finley, but will also be intercut with close-ups of the other characters as they react, which they invariably do. And the small stage, framed by an all-encompassing set, is ideal for video presentation. It’s almost like a studio set, and the camera work gives you the impression that you’ve got a detailed view of everything that’s going on.

The presentation from Opus Arte is up to the high standards of both the production itself and the video editing. The liner contains an essay from John Allison entitled ‘England’s Bayreuth’, about the long history of attempts to get Wagner on the Glyndebourne stage. This is reprinted from last year’s Glyndebourne programme, but is well worth reading again. The extras are two docs, one behind-the-scenes and the other interviews with the creative team.

What more could ask for? McVicar’s production is specifically tailored to the Glyndebourne house (although it is a co-production with the Chicago Lyric and SF Opera, so I hope it works in those houses). A little empathy is therefore required on the part of the viewer for the unusual venue – at least for Wagner. Musically, the performance is chamber-like in that all the detail comes through with unusual clarity. But there is grandeur here too, especially in the finale. I’m happy to give this the highest recommendation, and also to suggest that it is now the best available choice on DVD. Not that the competition is great: Katarina’s Bayreuth version is an acquired taste (although musically it is excellent) and Otto Schenk’s staging, available from both the Met and Vienna, is stolid and drab in comparison to the crisp, nimble images and sounds achieved by McVicar and Jurowski. This might not be the last word on Wagner’s effervescent and kaleidoscopic score, but as far as video productions go, it’s likely to remain the version of choice for years to come.