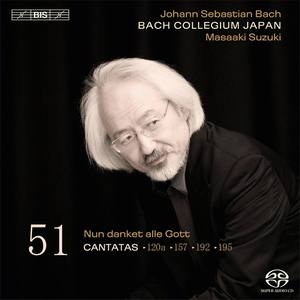 Only a few discs remain to be recorded in Masaaki Suzuki’s Bach Cantata cycle, and it seems that the high standards he and his ensemble have set are going to continue undiminished right up to the end. This 51st volume is the second devoted to secular cantatas. It has all the qualities we’ve come to expect: sprightly and engaged performances, superhuman musical precision, and sound quality of the very highest order. But there are a few surprises too, so it is great to see that Suzuki, even as he comes into the closing straights of this mammoth project, still isn’t taking anything for granted.
The four cantatas were all written for celebratory occasions, but as they are not being linked directly to the church calendar, they have proved unusually difficult to date. The first and last cantatas on the programme, BWV 195 and 120a, were both written for weddings, and both introduce some (presumably unintentional) comedy into the proceedings with a chorale for after the event titled as “Post Copulationem”. Despite their secular designation, the texts are largely on liturgical themes, and the format and scale of each of the works are similar to those of the larger church cantatas. They also have a similarly chequered textural history, with a good deal of reconstruction work required in many cases. BWV 120a is a case in point. Owing to the lack of a complete surviving score, there aren’t many other recordings of this about. That said, most of the movements also appear in the cantata BWV 120, which Suzuki has already recorded: his doing so again shows an impressive dedication to the comprehensive coverage of the repertoire.
The instrumental soloists and obbligatists are always a special treat in Suzuki’s Bach, and so they prove here. There is one name, however, in the orchestra that will come as a surprise, Jean-François Madeuf as solo trumpeter. Throughout the history of the period performance movement, the convention for trumpeters has been to use instruments with tone holes. There is no historical precedent for this, but many deem it necessary for the level of intonational accuracy and tonal consistency expected by today’s audiences. Madeuf has pioneered the use of natural trumpets without tone holes and has demonstrated that intonation need not suffer, at least when the performer has the necessary skills. Even so, this does make for trumpet playing with rough edges. Many of the notes have to be pushed through the instrument in spite of its acoustical properties, and, historically faithful as the results might be, there is an unevenness here that sits uneasily with Suzuki’s manicured, perfectionist approach. The good news is that the clash of performing cultures does not diminish the glories of Bach’s opulent choruses. Madeuf uses dynamics to carefully shape his phrases, and although one or two of them seem to trail off as the physical demands get the better of him on concluding high notes, on the whole he gives a performance that closely fits Suzuki’s established Bach aesthetic.
Elsewhere, flautists Kiyomi Suga and Liliko Ozaki provide magnificent support for solo singers. Just listen to the soprano recitativo “Wohlan, so knüpfet denn ein Band…” with its warm, glowing accompaniment from the two flutes hocketing a rising scale figure. If you listen with a good pair of headphones, this flute sound seems to fill the whole of the Kobe Shoin Women’s University Chapel, bathing its every corner in an iridescent light. Magnificent. The strings produce a similar effect in the opening chorus of BWV 192, and that absolute precision of ensemble pays dividends. Then the choir enters, performing with the same level of care and accuracy, and the results are just wonderful. And listen to how well the SACD sound picks out the details of the choral counterpoint.
The Sinfonia that opens the second part of BWV 120a includes a surprising solo performance from the organ. The instrument provides a running semiquaver solo line throughout this instrumental movement, but, for some reason the organist, Naoko Imai, choses to play it on single diapason register. The resulting sound is arrestingly simple and straightforward, but more angular and assertive than anything we usually hear from Suzuki’s ensemble. Even at Vol.  51 of this project, Suzuki and his players are finding new ways to surprise their audience.
The vocal soloists, on the other hand, are all familiar names. Suzuki’s loyalty to a handful of mainly European singers for solo parts in these cantatas has proved a unifying feature of the set, and another key aspect of the exceptionally high musical quality. To my ear, soprano Hana Blažíková puts in the finest contributions, but it’s a very close contest. It seems that Suzuki is now committed to retaining the aging bass Peter Kooij until the very end of this cycle. He’s had some weak moments in previous instalments, but is on form this time round, and any lingering doubts about his vocal support or stamina are countered by the incomparable stylistic affinity he has for this music, the result of a career that spans the whole history of the historically informed movement.
Another excellent release then, from Suzuki and his (predominantly) Japanese forces. With only about four more discs left, this cycle really is about to come to an end. I, for one, am going to miss the regular updates from Kobe on Suzuki’s Bach journey, but the final instalments are shaping up to be among the finest contributions this remarkable conductor has made to the Bach catalogue.