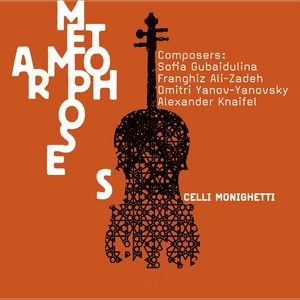 
The Louth Contemporary Music Society has done it again. They’ve produced another excellent CD of Slavic and Central Asian music, fitting squarely into their already established corporate identity, yet filled with surprises. Each of the composers featured here has already been introduced on previous LCMS releases, but the music each of them provides for this one fully justifies a further showcase of their work.
The theme this time is music for cello ensemble. Cellist Ivan Monighetti is an LCMS regular, a virtuoso soloist who clearly shares the sociey’s taste for new music from Central Asia. He’s also on the staff at the Basle Academy of Music, where he leads Celli Monighetti, an ensemble made up of his present and former students. It is they who feature here, but don’t be alarmed, as these are anything but student performances. The quality and sensitivity of the playing is excellent throughout. Nor are they just a backing group for Monighetti himself; all this music is truly ensemble work, and Monighetti’s solos, fine as they are, are kept to a minimum.
The programme opens with Perotin’s Viderunt Omnes by another LCMS regular Dmitri Yanov-Yanovsky. Perotin’s famous work is treated as a repeating ground, over which YY plays out a range of ideas and sounds. For those with an interest in the future direction of religious minimalism, this work should provide some reassurance that things are moving on, and in wholly interesting and worthwhile directions. YY is not afraid to repeat, and repeat at length, but he also develops. The result is a musical structure that combines atmospheric minimalism with symphonic rigour. That’s quite an achievement, considering how many composers have tried and failed with that combination in recent years.
Shyshtar Metamorphoses by Franghiz Ali-Zadeh is the most ‘ethnic’ offering here. As with much of her work, the piece evokes Ali-Zadeh’s Azeri roots through allusions to the country’s folk music. Cello ensemble proves the ideal medium for this music, as the instruments can convincingly evoke the sounds of Central Asian stringed instruments, but in a sufficiently generalised way that the listener does not spend the whole work trying to identify them. Curiously, the richest and most intense textures in the piece are achieved when the cellos play in unison, a testament to the range of colours Ali-Zadeh draws from the ensemble. And when she seeks a warm, round sound, the players are always able to oblige. (Sound engineer Alexander Van  Ingen deserves credit for this too, and for the richness and clarity of the sound throughout the album.)
Alexander Knaifel’s O Comforter is a real treat. This work is very much in the spirit of his masterpiece In Air Clear and Unseen. Both are slow and quiet works for strings that maintain the interest through unexpected harmonic shifts, and chords that are never quite as consonant as they seem. It is as if Knaifel has resurrected a mediaeval organum style, but one entirely of his own making. The work was originally for choir, but if anything works even better for cello ensemble.
The Knaifel is framed by two works from Sofia Gubaidulina, On the Edge of the Abyss and Mirage: the Dancing Sun. The composer’s famous Canticle of the Sun is evoked by both works, especially the latter, as its name suggests. But the exotic percussion of Canticle returns in On the Edge of the Abyss, this time in the form of two waterphones. But the focus throughout is on the cellos, and (thanks perhaps to her many works for Rostropovich) Gubaidulina has an impressive grasp of the wide range of possibilities the instrument offers. As on previous LCMS releases, the Gubaidulina works  are the most sophisticated and the most successful, especially On the Edge of the Abyss, which has by far the most sophisticated textures of any of the works here. Just one small grumble about it though: it is based on the plainchant for the Dies Irae. When Berlioz did this it was effective, but the extent to which this theme has been repeatedly abused in the intervening years (especially by Rachmaninov) has turned it into a hopeless cliché. Gubaidulina evidently expects us to listen with innocent ears, but that can be quite a struggle.
As ever, LCMS provide classy packaging and detailed notes. The programme notes are by Martin Adams, who does the project a huge service by giving us all the information we need, and without all the abstract and irrelevant rubbish we would have to sift through if this was an ECM release. Nobody has yet told him that Rostrpovich has died however, and I’m sorry to have to be the one to break it to him. But otherwise the information here is all pertinent and correct.
These recordings date from October 2011, and LCMS have been engaged in a number of other projects since then (Drogheda seems gradually to becoming Ireland’s capital for new music). So keep an eye out for their next recording. In the mean time, this one is highly recommended.