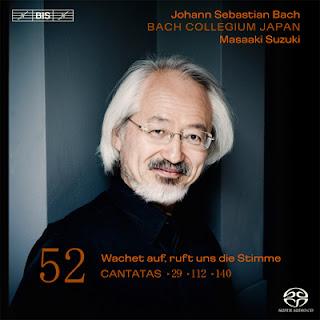 
Masaaki Suzuki has never called his Bach Cantata project a “journey” or a “pilgrimage”, he’s much too modest for that sort of self-promoting jargon. But even so, as we reach the final volumes of this spectacular cycle, there is a real sense of homecoming. The conductor no longer has anything to prove, about his own interpretive approach or about the skills of his performers. On this, the 52nd instalment, we get a taste of everything that has made this cycle great, some excellent singing, some distinctive instrumental solos, and of course finely controlled balances throughout, but little in the way of showing off. The cantatas chosen have no extended virtuoso arias and the instrumental writing, while always satisfyingly elaborate, never puts anybody in the spotlight for more than a minute of two, and even then makes relatively modest technical demands on them. The result is an album of assured and technically proficient Bach performances, in which all the musical and expressive demands are easily met, and which impresses as much as any previous instalment, although more for the continuously high standards than for any particular musical feats.
The programme opens with perhaps the most famous cantata of them all, BWV 140 aka “Sleepers Wake”. The opening Chorale sets the choir against a double obbligato of solo oboe and strings. A little more definition to the string sound may have helped here to create a clearer sense of duet with the solo oboe, but, as with everything Suzuki records, there is never any danger of their lines actually getting lost in the textures. The third movement, a duet between soprano and bass, is accompanied by an obbligato line from the piccolo violin, that’s a violin tuned a third higher than normal. Despite its high tessitura, the instrument blends wonderfully into the textures here, always only adding interest rather than stealing the spotlight. Just as interesting is the interplay between the voices of Hana Blažíková and Peter Kooij. Suzuki’s decision to use female voices for this project may have seemed unusual when he started out, but it’s fairly mainstream these days. Listening to these two voices perfectly complementing each other despite very clear differences in timbre fully vindicates the approach, if any further vindication is needed. When we reach the famous chorale in the fourth movement, the big surprise is the roundness and warmth of the string sound. The generous acoustic must help, as must the precision of ensemble, but the sheer elegance of tone from every member of the ensemble is the most startling feature – and all without even a hint of vibrato!
One of the most surprising, even counterintuitive, signings in these later instalments of the Suzuki Bach Cantata cycle is trumpeter Jean-François Madeuf. He specialises in playing instruments without tone holes, an approach which, while vindicated by history, inevitably creates a less precise and more strained sound than Suzuki usually favours. It has worked out though, and his contributions to this album are excellent. For BWV 140 he plays a tromba da tirarsi, which is a slide trumpet. For the second cantata on the disc, BWV 112, he plays horn. The horn section isn’t highlighted throughout but it does have some very important entries, one of which is at the very beginning where they introduce the cantata with very brief unaccompanied passage. The tone here is satisfyingly throaty, but the precision of tuning and ensemble within the section is never in doubt. The pastoral theme of the grazing sheep in BWV 140 is continued in this cantata, and in the aria that forms the second movement an oboe d’amore obbligato affords the music a particularly mellow tone. This is continued in the fourth movement, a duet for soprano and tenor. The tempo is a little fast here, in fact it is one of the few movements on the disc in which Suzuki’s trademark propulsive tempos are evident. Blažíková again demonstrates her impressive ability to lead the music without overpowering either the ensemble or her duet partner. And her clear, open tone is just as evident in the higher registers here as it is in the more comfortable tessitura of the previous cantata.
The final offering on the disc is Cantata BWV 29, Wir danken dir, Gott, wir danken dir. This is one of Bach’s many cantatas written for a civic occasion, this time the inauguration of the city council. There is certainly some pomp and ceremony, but on the whole – and perhaps this is as much to do with Suzuki’s interpretation as Bach’s score – the music maintains its easy-going and often pastoral mood. That said, the Sinfonia first movement is a grand opening gesture. This is essentially a concertante orchestral movement with organ solo. Maduf returns to his trumpet to give weight and attack to the orchestral interjections, the ideal balance against the flowing diapason sounds of the organ. Later on we get a version of the Dona nobis pacem from the B Minor Mass, but this too is performed in a laid back and unassuming way.
It just goes to show that Suzuki no longer has anything to prove. Throughout this cantata, indeed throughout the whole album, the textures are filled with tiny details of word setting, orchestration and counterpoint. The performers execute each of these devices without ever forcing them into the foreground, knowing that the quality of audio recording will make each of them crystal clear. If Suzuki, or anybody else, where to begin a Bach Cantata cycle with this much studied assurance, it might raise concerns that complacency would creep in later on down the line. But now, only two or three discs from the end of this magnificent cycle, the conductor and his ensemble are toning down the extravagances. They’ve got our attention (they’ve certainly earned it) so from now on they can concentrate on the details of these scores, the level at which they truly show their greatness.