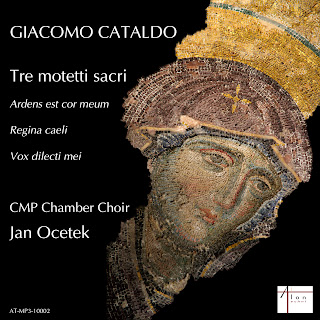 
Harmonically adventurous choral music is all too rare. The reasons are clear enough: it can be very difficult for choirs to learn new works in which their lines interact in complex harmonic relations. Composers also have to work hard to succeed in this field, as their music must still be idiomatically suited to massed voices, even when new harmonies are being introduced.
Giacomo Cataldo is therefore to be commended for his bravery in writing new music for choir without making any apparent compromises to his Modernist harmonic language. His Three Sacred Motets combine tradition and innovation in a variety of ways, but the main focus of the innovation is the harmony. The language here is atonal and relatively austere, but it is always interesting and shapes the music through a distinctive system of relative dissonance and resolution. Schnittke’s Psalms of Repentance occasionally come to mind, as do the choral works of Jolivet. However, the dissonance is never extreme, and a system of suspensions, resolutions and even cadences links the harmonies to the traditional tonal constructs, that are otherwise notable by their absence.
In all other respects, these motets fit squarely into the Catholic traditions of liturgical choral music. The textures are largely homophonic, and most of the gestures are decisive and confident.  There are similarities here with Bruckner’s motets, but even if Bruckner did not directly influence Cataldo, the comparison demonstrates how both composers draw on the long history of Catholic church music to create works that are both traditional and new. Cataldo presumably intended these works for liturgical use, and the clarity with which he has set the words can only aid them in that context.
My only concern with this music is its lack of textural variety. The voices sing in rhythmic unison almost throughout. The only major exception is a device involving passing notes in one of the lines to join the chords together. This is sometimes used to emphasize phrase openings, but occasionally whole passages are strung together with this faster movement in the inner voices. It is an effective device, but one that risks monotony though overuse.
The CMP Chamber Choir gives an excellent performance, especially given the difficulties the music poses. They carefully enunciate all of the words and have secure intonation throughout. It’s not a perfect performance though. The sopranos are occasionally required to sing quietly in the upper register, and in dissonant harmonic contexts. That would test the skills of any choir, and in this one, the ladies’ voices, when put to this extreme test, can sound brittle and insecure. Also, many of the grander gestures in the music seem curiously under-sung, with less confidence and gusto than the composer clearly intended.
Nevertheless, this recording represents a fascinating new direction for Catholic choral music. Cataldo skillfully balances the traditions in which he works with the innovations that he seeks to introduce. A little more sophistication in the interaction between the voices would make this music even more interesting, but in the absence of rigorous counterpoint, the harmonic language offers plenty of alternative interest. Cataldo evidently works in a wide range of genres, and his music is not limited to the choral field. Even so, the artistic success of this project ought to demonstrate the suitability of his compositional style to the field of liturgical choral music. Hopefully choral writing will continue as a central concern in Cataldo’s compositional career, which promises to be a successful one, whichever direction he now takes.