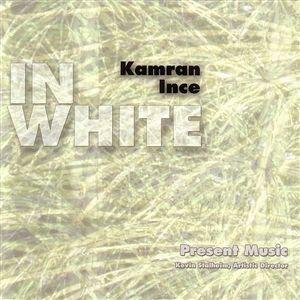 
Kamran Ince divides his time between Turkey and America, and carefully balances the musical influences of the two countries in his music. Ideas and sounds from Turkish folk music appear, but are so well integrated into the textures that they never feel like exotic additions. His American side is most clearly evident in the music's structure, which usually relies on a repetitive minimalist approach. The diatonic modality also suggests an all-embracing American aesthetic, a cosmopolitan musical environment accommodating ideas and sounds from overseas.
This album first appeared in 2004, and gives a snapshot of the diverse trends in the composer's work in the years around the millennium. The music begins at Ince's most American and gets more and more Turkish a the album progresses. Flight Box, for ensemble and choir, is described by the composer as “a diary of a flight which reaches its destination safely.” That last reassurance required because of the suggestion in the title of a black box recorder and the fact the work appeared soon after 911. This is the most minimalist of the works on the disc, but it's a gritty industrial minimalism, reminiscent of Louis Andriessen. There is no development here to speak of, instead the blocks of repetitious music are edited together with abrupt shifts from one to the next. Stirring melodic lines ride over the top of all this, and a backing choir provide sustained textures, suggesting Morricone at his most bleak and windswept.
A cello solo piece follows, MKG Variations performed by Karl Lavine. The form here is again based on repeated or slightly changing cells, and the ideas within those cells owe much to Bach's Cello Suites. Pizzicato figures vary the texture and give the first suggestion on the program of Turkish folk instruments.
In White is a violin concerto, the solo part taken here by Present Music's Artistic Director, Kevin Stalheim. It is in three slow movements interspersed with two short and fast ones. The violin writing is simple but effective. Ince weaves long, seductive melodies for the soloist in the slow movements, which he contrasts with more astringent, jumpy sounds in the faster ones. As in Flight Box, a wordless choir supports the ensemble, and although the singers' contribution is atmospheric, it feels like a distraction in the context of a concerto.
The devastating earthquake that hit Turkey in 1999 motivated the piano piece In Memoriam 8/17/99, written later the same year and played here by Phillip Bush. Within the sombre atmosphere of this work, Ince introduces some surprisingly modern sounds. Textures that you might associate with the post-war avant garde are presented, but always against traditional sounding harmonies. The result sounds like a kind of diatonic Boulez, if such a thing were possible.
Ince's Turkish side finally rises to the surface in the final piece, Turquoise. The heterophonic music of the Ottoman court was apparently the inspiration for this work for an ensemble of seven. Tuned, metallic percussion dominates most of the textures and gives the music a distinctly Janissary feel. Structurally, the music is as minimalist and repetitious as ever, although the rhythms within the repeated cells are more complex, bringing the overall effect close at times to Conlon Nancarrow.
The Present Music ensemble of Milwaukee give precise and convincing readings of these scores, and there is never any feeling of impatience about the repetitive forms. The sound quality is reasonable; no recording details are given, but these sound like studio recordings to which unconvincing digital reverb has been added. Nevertheless, the ensemble has done the composer a great favor in presenting his music to this standard. Their collaboration has continued since, so if you want an update on Ince's more recent work, seek out the disc from Present Music that was released on the Naxos label in 2010 (9.70011).

This review appears in Fanfare, issue 36:2.