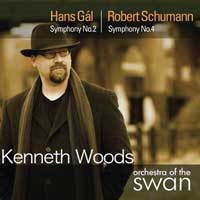 Avie’s Gál/Schumann symphony cycle reaches its conclusion with this, the fourth instalment. As with the previous releases, there are plenty of surprises here, and the two symphonies, Gál’s Second and Schumann’s Fourth, find their respective composers at their most adventurous and experimental. With the previous couplings, it has taken a stretch of the imagination to find common ground between the respective works, but here the connections are clear, even suggesting direct influence. Both works are experimental in their structure, but both seek to temper that radicalism with fairly conventional themes and localised discourse. Problems arise in both cases, especially in the imbalance of dramatic weight between the movements, and in the fact that the structural experiments lead to durations for both works that their thematic material struggles to justify. But both are well worth hearing, and are given excellent readings by Kenneth Woods and the Orchestra of the Swan.

Gál’s Second Symphony was written in 1942-1943, a period of intense personal tragedy for the composer, whose German/Jewish family suffered as much as any in this period. It seems perverse to highlight any good luck that he may have had, but from an artistic point of view his move to the UK was in some ways fortuitous. Gál’s later music often gives the impression that he had adjusted his style to fit the Pastoral tastes of his adopted homeland, but listening to the Second Symphony, which was written when he had only just arrived, it is clear that he actually brought that style with him. There are German elements too, particularly the rigorous thematicism and regular use of contrapuntal textures, although neither of these are as evident in the Second as they are in his other symphonies. The four movement form begins with a calm introductory movement, followed by a rigorous Sonata-Allegro, then an intensely emotional Adagio, and concludes with developmental but ultimately resigned finale. The best music is to be found in the Adagio, and Gál originally sanctioned performances of this movement as a standalone work. At 15 minutes (of a 45 minute symphony) it is long, but never outstays its welcome. Elsewhere, and especially in the second movement, Gál seems to struggle to make his “light music” style fulfil the dramatic functions his innovative form requires. But Woods makes an excellent case for this work, always finding an appropriate balance between that intrinsic lightness and the music’s symphonic function. The work opens and closes peacefully, and Woods and his orchestra excel in both of these passages. The ending in particular has a Sibelius-like quality; perhaps Gál himself would have disapproved, but the music responds well to this controlled but resigned approach.

The Schumann is also a Second Symphony, chronologically speaking, although the version given here is the final one, from 1851, which led to its being numbered as the Fourth. As with previous releases in this series, it takes a cold heart and a cynical ear to pick out the minor flaws that distinguish this Schumann recording from the very best. Technically, the orchestra is on top form; there’s nothing “regional” about their playing. They are also able to combine passion and energy with that technical precision, and the results are always dynamic and engaging. The timpani and winds could do with more presence in the mix, but this is probably a consequence of having to balance them against a relatively small string section. Not that the string section sounds small, and the players make the most of Schumann’s densely-voiced chords to give a full symphonic sound despite their numbers.

If you follow Ken Woods’ blog, you’ll know that he is a committed advocate of exposition repeats, so it is no surprise that all marked repeats are diligently observed here. Woods makes an excellent case for the exposition repeats in both of the outer movements, maintaining, even increasing, the momentum at the second appearances. That can’t last for ever though, and the temperature drops significantly in the first movement development, and it takes Woods a few minutes to regain the initiative. And not even he can persuade us (or me anyway) that the many, many repeats in the Scherzo are justified. Still, his is a coherent approach, and one that finds meaningful answers to most of the open questions the work’s structure poses.

Since Kenneth Woods was brought on board this Gál/Schumann project (the first instalment was conducted by Thomas Zehetmair) he has become its most enthusiastic advocate. He provides the liner notes to this disc, which are informative and particularly useful in the case of the Gál. He has also written extensively about the background to the project at his website: kennethwoods.net/blog1/bobby-and-hans. It sounds like there is plenty more music by Hans Gál waiting to be rediscovered, so now this symphony cycle is complete, it will be interesting to see which aspect of the composer’s repertoire Woods will focus his attentions on next.

Email ThisBlogThis!Share to TwitterShare to FacebookShare to Pinterest
Labels: Avie, Gál, Orchestra of the Swan, Schumann