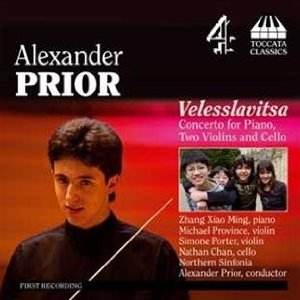 Considering that Toccata Classics specializes in bringing to light obscure repertoire, it is little surprise that they are not often involved in television tie-ins. In fact, the background to this CD sets the whole project apart from standard Toccata fare. Velesslavitsa grew out of a series on UK’s Channel 4 called The World’s Greatest Musical Prodigies. If that sounds trite and sensationalist, then the quality of the music that results will come as a pleasant surprise. The premise of the series was that the talented young composer/conductor Alexander Prior would travel the world in search of similarly talented young performers, for whom he would then write a work. The group he assembled consisted of two violinists, a pianist, and a cellist, so he then set to work creating Velesslavitsa, a concerto grosso that was played by them under his baton and accompanied by the Northern Sinfonia as the culmination of the final episode.
Listening to the recording, it is easy to forget just how young the participants were. Prior was 17 at the time, and his soloists ranged from 10 to 15. The music he writes for them isn’t particularly virtuosic, which comes as a surprise. Instead, he seeks—so he tells us in the liner—to represent their personalities: Province as sensitive, Porter as precise, Chan as expressive, and Chan as lyrical.
In terms of composition, Prior has a lot of competing demands to balance here. These portraits of his four soloists must fit into a single stylistically unified work, and one that will hopefully find favor with a television audience. Then there is the orchestra to think about, and he must also use the opportunity to present his compositional voice to this wide audience. Astonishingly, he manages to cover all these bases, presenting a work of considerable artistic merit, whatever criteria it is assessed against. Prior is half Russian (on his mother’s side) and the work was written shortly after he had completed undergraduate studies at the St. Petersburg Conservatory, where he had been the youngest pupil since Prokofiev. Russian music of the Romantic era is his starting point, and the many Russian dimensions of the work are clear from the outset. The title is Russian, and refers to the god of music in ancient Slavic cultures. The concerto is large and sprawling, but retains a sense of unity through the recurrent use of a Russian Orthodox chant. Prior takes every opportunity to show off his imaginative use of the orchestra, but even this is never just for effect. The orchestration continually varies, but is surprisingly economical, with everything in the ensemble always seeming to happen for a good reason.
My one criticism, and it’s something common to all prodigy composers, is the amount of undigested influence that often comes to the surface. The first orchestral exposition sounds like it has been lifted directly from Boris Godunov, and later on the style comes dangerously close to Shostakovich. There is also a good deal of Bruckner and Wagner in the finale. In his efforts to fulfill all the many functions expected of this work, Prior does go on a bit too long. The Grave central movement would be more effective if it where half the length, and the coda of the finale seems to go round in circles for a few minutes, which is all the more frustrating given that the ending, when it comes, is disconcertingly abrupt.
Both the performance and recording are excellent, and neither suffers for being taken from a live performance. Prior the composer is often daring in the ways that he moves unexpectedly between different moods and tempos, but Prior the conductor is able to demonstrate the innate logic behind each of these shifts. The sound benefits from the fine acoustic at the new Sage concert hall in Gateshead, and the woodwind and percussion soloists come across with particular clarity. A recommended release, then, and one that ought to appeal, for different reasons, to a number of different classical audiences. The introduction by Martin Anderson in the liner mentions that the television program for which the music was written did not include the piece in its entirety. That seems like a shocking omission, so all credit to Toccata Classics for giving us the chance to this fine work in all its glory.