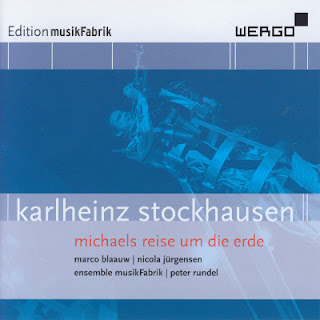 Stockhausen’s epic opera cycle LICHT poses huge problems to anybody trying to stage it, record it, or even get their head around it as a listener. Fortunately though, despite its huge scale, the constituent operas are made up of individual acts that can stand alone and that can be appreciated with just a minimal understanding of the overall context.
MICHAELs REISE UM DIE ERDE (Michael’s journey around the world) follows a typically eccentric scenario. The work constitutes the second act of DONNERSTAG, which focuses on Michael, the guardian angel of mankind and one of the three central characters of LICHT. The first act tells of Michael’s childhood and youth, and culminates in a rite of passage in the form of a music exam. What is it with Stockhausen and music exams? A whole act of MITTWOCH is devoted to an orchestral audition, not an obvious subject for operatic drama. But then, LICHT is only opera in the most tenuous generic sense, as MICHAELs REISE amply demonstrates. The music here is wholly instrumental, with two soloists representing the main protagonists: the trumpet (Marco Blaauw) as Michael and the basset horn (Nicola Jürgensen) as Eva. The journey around the world takes in seven stops, beginning in Cologne (naturally) and then proceeding to New York, Japan, Bali, India, Africa, and Jerusalem. Not that you’d work out any of this from the music itself, which studiously avoids any regional or ethnic color to give us an idea of where we might be at any given moment. That’s probably just as well, given the very un-PC associations that Stockhausen attaches to many of the destinations. New York, for example, is chosen to reflect conflict and war (connections here perhaps with the composer’s controversial comments about 9/11 some 20 years later), India represents “temptation and decline” and when we visit Africa it is for an encounter with death.
All of this can be safely ignored though as we listen to the music. The concept of flight was central to Stockhausen’s theology, and it is the one aspect of the scenario that is meaningfully conveyed through the music. The work’s sections are connected together attacca into a single span, and for the most part the two solo instruments ‘fly’ over the ensemble accompaniment, giving a feeling of airborne propulsion over steady and sometimes gradually evolving pedals in the orchestra. Brass instruments predominate throughout, especially at the opening, which is an aggressive duet between the trumpet solo and a solo trombone. The tuba in the ensemble also comes to the fore later on, acting as another adversary to the trumpet. We also hear some spiky woodwinds in the ensemble, and towards the end what sounds like an electronic organ of the type you might associate with early Philip Glass.
There are also apparent stylistic allusions to free jazz in a few sections, with walking plucked bass under some laid back jazzy licks from the trumpet. Are these allusions deliberate? Either way, the ease with which they integrate into the texture demonstrates the relaxed and undogmatic nature of the music throughout the work.
The playing and recording here are excellent. The soloists and the ensemble enter fully into the spirit of Stockhausen’s surreal enterprise, and the recording projects a real sense of drama, especially in the many and varied articulations from trumpeter Blaaw. We don’t hear as much of the basset horn as the scenario suggests we should, leading to the suspicion that it is often obscured beneath the trumpet sound.
As with most of LICHT, this act clearly relies heavily on the stage action to make sense, so an audio recording only gives part of the story. Even so, being a purely instrumental section, the audio-only experience has a certain self-sufficiency and internal logic. In fact it could be argued that some instrumental sections of cycle can only be fully realised in audio-only recording. Listen, for example, to the Arditti’s excellent recording of the Helicopter Quartet (Scene Three of MITTWOCH—Montaigne Auvidis 782097), in which the sounds of the strings and the helicopters balance far better for being mixed in a studio than could ever be achieved ‘in-flight.’ That said, MICHAELs REISE is presented here in a live recording. There are no helicopters in this scene, although there does seem to be plenty of flight, with the two soloists regularly up in the air on trapezes. As in almost any Stockhausen project, the sound engineers have clearly been posed a unique set of challenges to recreate the experience in an audio recording. Fortunately, they succeed, and the results are as atmospheric and engaging as any Stockhausen fan could wish for.

This review appears in Fanfare issue 36:6