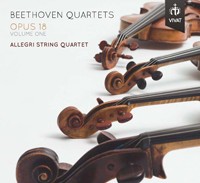 
Beethoven String Quartet cycles are hardly at a premium these days, but this first installment from a new one by the Allegri Quartet has much to offer. Their interpretation draws from both the modern and period instrument traditions, finding useful ideas in both to enhance their readings. Energy and drive are the hallmarks of their approach, but the players are also interested in finding rich and diverse tone colours to carry the music. The result is a performance that is both distinctive and highly musical, but one that avoids both the intellectual pretence of period performance and the emotional indulgence of some more Romantic readings.
The Allegri String Quartet is 60 this year, although you wouldn’t know that from the literature that accompanies this release, nor from the photographs of the players, three of whom seem very young indeed. This Beethoven release, and presumably the entire cycle that it introduces, are the first recordings by the ensemble for the Vivat label, a recent start-up by Robert King, now returned to civilised society. Given King’s musical background, it is unsurprising that most of the Vivat releases so far have been of early music. The Allegris use instruments in modern configuration, but there are many aspects of their playing that suggest an affinity with the period performance world, allowing their Beethoven to fit snugly into the Vivat roster.
The players tend to avoid vibrato, or at least favour a strident and direct tone. This is made possible by their almost flawless intonation and articulation, which allow them to present Beethoven’s textures in as clear a manner as we could wish for. The faster movements benefit most from this approach, as it allows the players impressive agility, without compromising their always satisfying tone. The slower movements fare less well though, as the Quartet often opts for surprisingly slow tempos and an evenness of tone that often risks monotony. That said, when Beethoven offers musical variety, as in his rondo finales, the Quartet is able to clearly articulate the sections through subtly contrasting tonal colours.
The recording was made at the hall of the Menuhin School, and whether through the hall’s acoustic or the technical wizardry of the engineers, a warm but clear ambience is achieved. The warmth is particularly valuable when the Quartet’s tone becomes thin, as it allows the music to always retain its sense of presence and immediacy.
The quartets appear in the order Op. 18/4-3-5, which, according to the liner, is the best guess at to the order in which they were composed. Following the chronology of this cycle will be interesting, as there are already so many aspects of the playing in these early quartets that will suit, when they get to them, the late ones. Already, the Allegris are attempting, and to a large extent achieving, a subtle balance between the Classical and Romantic tendencies in Beethoven’s music. The balance changes as the cycle proceeds, so it will be interesting to hear if these players go with the flow or impose a greater sense of order as the composer’s liberties increase.