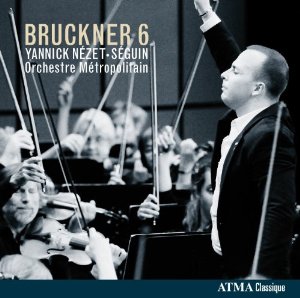 
Yet again, Yannick Nézet-Séguin demonstrates that he is one of the most competent Brucknerians among the younger generation of conductors today. His reading of the Sixth Symphony doesn’t go to any extremes, but is distinctive and focused throughout. It is in the modern school of Bruckner interpretation, so tempos are fast and rubato is kept to a minimum, but it is at the liberal end of that spectrum, and in spite of the rigor, Yannick also finds plenty of emotion and heart-on-sleeve sentiment in the score.
The tempo at the opening is fast, and the textures light and crisp. When we reach the lyrical second theme, Yannick draws a warm, singing tone from the strings, phrasing the music through broad dynamic arches but without permitting even the slightest rubato. The orchestra is responsive, but occasionally lacks the finer nuances that he is looking for. The brass are expected to provide weight and gravitas, but without venturing into the very loudest dynamics. They are not always able to produce the goods, so many of the outer movement climaxes feel underpowered. The ensemble in the brass is also occasionally suspect, often compromising the clarity of their textures. The string sound is sometimes thin, and the violins have occasional tuning issues in the uppermost register.
The interpretation unfolds in different directions as the first movement progresses. Yannick’s reluctance to indulge in any more rubato than he needs makes many of the transitions feel rigid, and almost minimalist in their repeating ostinato figures. And when a rallentando is absolutely necessary in a link section, there is a strong feeling that it is being applied under duress. On the other hand, the clarity that Yannick brings to each of the themes ensures that the motivic links that hold the music together are always apparent. And in the development he does (finally) allow the music to breath, his elegantly timed caesuras helping to prevent any sense of autopilot in the otherwise disciplined tempos.
In the second movement, the dichotomy between rigor and emotion becomes even more apparent. Again the tempos are regimented throughout, with moments of tenderness and beauty peeking out from the otherwise highly disciplined phrasing. In fact, Yannick eases off as the movement progresses, and the stiffness of the opening passages is replaced later on by slightly more supple phrasing.
The scherzo responds better to the disciplined approach, although even here the transitions feel stiff and unyielding. But Bruckner’s long crescendos are skillfully handled; each feels both controlled and directed. Again, the climaxes seem underpowered because of the lack of weight in the brass tone, although the horns compensate somewhat in the trio with some satisfying raspy interjections. In the finale, Yannick is able to make more of a virtue out of his brisk tempos and nimble orchestra. Climaxes are again underwhelming, but the quieter passages have real character. The ending is abrupt, but does not sound as arbitrary as in some recordings.
Atma released the earlier volumes of this cycle in SACD, but they seem to have abandoned that policy, which might be just as well given the ensemble problems here, that higher definition would probably emphasize. Nevertheless, the recorded sound is clear and atmospheric. The interpretation won’t be to everybody’s taste, but it makes musical sense on its own terms. If you like a more modern approach to Bruckner, but find Dausgaard, Vanzago, et al. too extreme in their revisionist tendencies, this might be for you. But Yannick’s indulgences are slight by the standards of previous generations, so there is nothing remotely retro about this Bruckner Six.