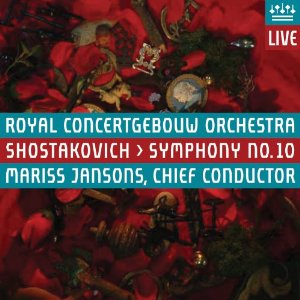 
Of all the orchestra own labels, RCO Live is surely the most consistently impressive in its release after release of outstanding recordings. They have put out one or two discs with unusual repertoire choices (Honnegger 3, some Dutilleux), but on the whole they stick to the big and well-known symphonic set pieces, particularly those by Mahler, Strauss and Shostakovich. The orchestra itself certainly excels in this repertoire, and the acoustic of the Concertgebouw adds just the right ambience. It is a winning combination, and this Shostakovich 10 is as good as anything they have presented so far.
Mariss Janons studied with Ilya Musin in Leningrad, which is all that needs to be said about his familiarity with Shostakovich’s symphonic works. His reading here is fairly slow, not quite as slow as Haitink, but slower than most Russian conductors. At this slower pace, Jansons is able to make the music broad and expansive, which again plays to the strengths of both the orchestra and the hall. But he’s also able to maintain the drama and the tension, partly through the sustained and supported playing of the wind section, but also through very sparing use of rubato. The militaristic tuttis, while slow, are performed with an insistent and driving pulse: the music may be broader, but the Stalinist terror is just as intense. This is particularly evident in the second movement, in which Jansons keeps the mood continuously oppressive for the full five minutes without ever letting up. The finale too is well paced, gradually building up to an appropriately overwhelming conclusion.
The sophistication of the playing, and the resonance of the acoustic, does detract a little from the sheer brutality of much of this music. The punch staccato chords don’t have the dryness you’ll hear on other recordings, and the intimacy of the sound prevents the woodwind solos from sounding as desolate and distant as they might. But given the very high audio standards throughout, it is difficult to consider any of these issues as detractions from the overall experience. The percussion section comes out particularly well in the recording; the timpani have a real presence, and the bass drum has a proper kick.
As so often with Jansons recordings, this one seems to achieve multiple and contradictory aims all at once. Jansons envisions the work in expansive terms, but paradoxically manages to create even more drive and vigour through the larger textures he achieves. He knows exactly how to show off the strengths of this great orchestra, which sounds as good on this recording as it has on any of its recent outings on disc. Most recordings of Shostakovich 10 are faster and less tonally sumptuous than this one, but most are less coherent and less intense as well. Jansons shows us that you can have the best of both worlds, provided that is, you’re conducting one of the world’s great orchestras in one of the finest acoustics available for a release at the cutting edge of modern recording technology.