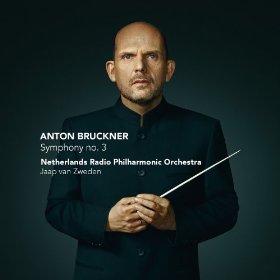 
Jaap van Zweden is living proof that the best training for an orchestral conductor is experience in the rank-and-file. In fact, Zweden never sat at the back: his playing career began at the age of 19 with one of the most prestigious orchestral positions in the world—leader of the Concertgebouw Orchestra. As a conductor, he has since spent eight years (2005-13) in charge of another great Dutch orchestra, the Netherlands Radio Philharmonic. This recording of Bruckner’s Third is one of the last installments in a well-received Bruckner cycle with the latter ensemble. The standards remain as high as ever, and the results are certainly impressive.
It is tempting to look for the roots of Zweden’s Bruckner in his Concertgebouw days. How many times must he have performed Bruckner’s Third there under the baton of Bernard Haitink? Listening to this recording, you could mistake it for the work of that conductor and that orchestra. The orchestral sound approaches that of the Concertgebouw. The brass has a similar feeling of effortless gravity, there is a warm, luminous glow to the woodwinds, and the strings have a satisfyingly complex and infinitely variable tone. Zweden’s reading of the score, much like Haitink’s, is broad and expansive, with liberal rubato, but with discipline too where it matters. Like Haitink, he is also able to create a sense of urgency and drive, but without actually increasing the tempo. Zweden is less emphatic with accents, and his approach favors homogeneity rather analytical clarity of texture. But the overall impression this gives is one of refined taste rather than indifference to the emotions in the score. He is also excellent at evoking atmosphere in quieter passages, and in building drama into the climaxes, both of which ensure that his interpretation always sounds truly ‘symphonic.’
If there is one serious charge that can be made against Zweden’s reading of Bruckner’s Third, it is the occasional feeling of complacency. For example, in one the second movement variations, Bruckner sets a theme in the woodwind against a pizzicato counterpoint in the strings. Zweden knows that his string section will be able to cleanly articulate the passage, but it still needs a little more focus and emphasis. Similarly, the tuttis at the ends of some sections and movements sometimes give the impression that the drama is over: the home key has triumphed so there’s nothing left to say. That is certainly the feeling that we get in the last page of the finale. The brass sound here is simply stunning: broad, weighty tones with immaculate timbral control, even at the loudest dynamics. It is as if they could be giving far more, but the occasion just doesn’t warrant it. But these are minor concerns, and it is far more satisfying to listen to an orchestra give this music more panache than it needs than to the many recordings in which the tonal quality begins to deteriorate midway through each of the long crescendos.
The SACD audio here is of the highest standard. Zweden’s Parsifal with these forces, and on this label (CC72519), seemed to rely on the acoustic of the Concertgebouw to create its impressive atmosphere and warm but precise sound. But this recording demonstrates that that was not the case. It is made in a studio in Hilversum and sounds just as good. There is plenty of space around the orchestra, a sense of presence to every section, and as much detail in the string sound as you could wish for. (Interestingly, this reveals the stings to have a complex and variegated texture, balancing their clear unity of articulation and ensemble with a microscopically textured sound that inferior technology would no doubt miss.)
A high recommendation then, for this Bruckner Three. Zweden gives a spacious account, which is never rushed, but never stalls either. The orchestra produces weighty, but never ponderous, textures for the tuttis, and luminous, elegant sounds for the quieter passages, especially those in which the woodwind predominate. All of these sounds are clear, but they’re complex too, and the superior audio does a great job of picking up all the minute details. But most of all, the disc deserves recommendation for Zweden’s interpretation, which is expansive and dramatic, but also patient and focused, an ideal combination that makes this one of the most satisfying and compelling recent recordings of the work.