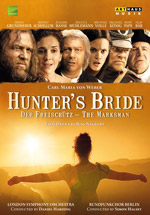 
Director Jens Neubert describes this project as an attempt to found a new genre: the film opera. He’s exaggerating the novelty; similar film versions have previously been made of Tosca, Carmen and Marschner’s Der Vampyr, with varying degrees of success, but Neubert’s Freischütz feels both more cinematic and more operatic than any of these. His approach is to pace the action according to the opera, retaining all of the music and (I think) all of the spoken dialogue too, while treating the visual aspect in purely cinematic terms. The result is a grand and appropriately gothic production that retains a surprising fidelity to the original, but without ever seeming constrained by it.
The action is updated to Weber’s own time, taking place against the backdrop of the Napoleonic wars, with both Max and Kaspar soldiers in the Saxonian army. We also get a short battle scene at towards the start, although it is a bit low on extras and doesn’t quite convince. Ottokar has an army battalion camped out in the grounds of his house, and at one point hosts a visit from Napoleon himself, a slightly gratuitous cameo. More effective though is the Wolf’s Glen (or ‘Gorge’ as the subtitles have it), which is strewn with the corpses of soldiers, some of which end up being used in the black magic.
The title Der Freischütz is notoriously difficult to translate into English, and this film seems to take two ‘shots’ at it: Hunter’s Bride and The Marksman. The former is more than a slight of hand though; it is a literal translation of Weber’s working title, Die Jägersbraut. This informs the interpretation, with Neubert doing everything in his power to make Agathe rather than Max the central character. Max himself is presented as fat and unkempt (Michael König with plenty of makeup), and his passion for Agathe seems superficial throughout. Agathe, by contrast, is played by the radiant Juliane Banse, who dominates proceedings and is undoubtedly the sympathetic character here. That said, she doesn’t even appear in the First Act, and while Neubert tries to make her the focus of attention in the finale, Weber does little to help him.
Various tensions arise between the two genres that this project is attempting to combine. The operatic pacing doesn’t feel very cinematic. It is good that there is so much spoken dialogue, but it’s not very dynamic, at least not in a Hollywood sense. And everything stops for the arias of course, although this is no more distracting than in filmed musicals, and Neubert introduces a range of interesting visual ideas to ensure that a filmic quality is retained, even in the longer arias.
More problematic is the sound production. All of the music was recorded at Abbey Road before filming began. Sound producer Joel Iwataki gets top billing in the literature for his work in creating a soundtrack that is suitable for the project, and his approach is certainly original. Although the music is performed and presented loyally, the postproduction is quite glossy, the style of sound production you would expect from a Hollywood blockbuster. The sound is attractive, although it is often rounder and more euphonious than we usually hear in opera. But this is clearly indoor studio sound, and no effort is made to reconcile it with the outdoor setting of most of the scenes. Although the LSO play well, a period instrument band would have suited the visual style better, especially as we see the villagers playing contemporaneous instruments, boxwood clarinets and the like.
The audio production style also has the effect of making everything in the music sound absolutely perfect, so it is difficult to criticise any of the singers on technical grounds. Daniel Harding conducts well, although he sometimes struggles to present the music with the sense of urgency it demands, such are the competing demands of the project. The singers also risk anonymity in this highly-produced audio environment. Again though, Juliane Banse shines here. Her rich, deep and distinctive tones can easily survive the postproduction process, and her performance is never less than compelling. Good dramtic turns as well from Michael Volle as Kaspar and König as Max. But Regula Mühlemann doesn’t bring much to the part of Ännchen, and René Pape’s unconvincing turn as the Hermit brings the finale dangerously close to unintentional comedy.
An impressive rendering then, of Weber’s masterpiece, but one with many flaws as well. Neubert sensibly approaches the opera as a stage director might, introducing a handful of interpretive ideas, some in sympathy with the original synopsis, others designed to create constructive tensions. The cinematic side of things is never allowed to get in the way of the work as an opera, although it often seems to run in a sympathetic parallel to the music rather than together with it as a fully-integrated unity.
Thanks are in order to Arthaus Musik for giving Hunter’s Bride a UK DVD release, but it is a shame it didn’t make it into cinemas here. What is it with the UK and Der Freischütz? There hasn’t been a staging of the work here in decades, though it is heard often enough in concert. Here’s hoping this DVD will raise interest and prompt its return to the UK stage.