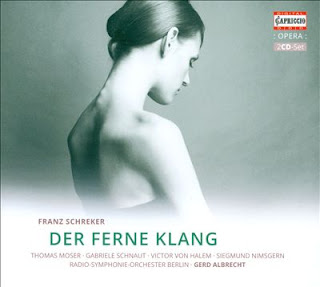 
Schreker’s Der ferne Klang deserves a much wider audience than it has so far reached, especially in the English-speaking world, so this reissue of a fine 1991 recording from Capriccio is welcome indeed. The reasons for the work’s continuing obscuring are difficult to gauge; the music here draws heavily on Mahler and the Strauss of Salome  and Elektra, all of which provide ample preparation for any audiences unfamiliar with Schreker’s work. Fortunately, the opera is now well represented on disc, so interested listeners can get the full measure of this magical score, even if seeing a staged production still remains an unlikely prospect.
The composer wrote his own libretto for the work. That’s almost always a recipe for disaster, but Schreker just about gets away with it. The story revolves around a hapless composer, Fritz, searching for a ‘distant sound’ that he has heard in his imagination. The search ends up consuming his life and separating him from his one true love, Grete. As with Strauss’ (much later) Capriccio, the scenario here allows music to become the subject of the story, rather than just its accompaniment, giving Schreker licence to write sumptuous music that in other contexts would run the risk of overwhelming the stage drama. The piece isn’t without its flaws, the narrative lacks focus and the music often seems overly indulgent, but the work’s strong melodic identity, and Schreker’s skilful writing for voices, ensure that everything in the score is engaging and that the music is always properly operatic.
This studio recording was made in Berlin in 1991. Conductor Gerd Albrecht takes a disciplined approach to the score, while still allowing the more expansive textures plenty of space. His many years experience in the opera pit shine through in his conducting of the singers, who are always kept at the centre of attention, despite the often heavy orchestration. When this recording was first released, some critics complained about Gabriele Schnaut’s performance in the lead female role of Grete. I’m inclined to agree that her singing lacks accuracy and that she has occasional tuning problems, but they are minor issues and don’t seriously detract from the listening experience. Few complaints could be raised about the remainder of the cast, who are uniformly impressive. Thomas Moser is certainly up to the challenges posed by the lead role of Fritz, and as well as accuracy and projection he also gives a distinctive and highly emotive performance. The recorded sound is good. In the balance of detail vs. atmosphere it leans slightly towards the latter, but clarity of texture is never seriously compromised.
When this recording was first released, it was one of two available, the other conducted by Michael Halász and released on the Marco Polo label. That version is now available on Naxos and is also good. The cast is not quite as good as here, but the detail in the orchestral sound is greater. The rerelease of the Albrecht recording in 2013 introduces it to a more crowded market with several newer versions now available. The pick of these is the SACD version on the ARS label, conducted by Dirk Kaftan. The improved sound quality made possible by the SACD technology is of considerable benefit to Schreker’s often involved textures, which shine with a new clarity here. That said, Kaftan takes a more relaxed approach to the score, and the pace of the music occasionally drops, leading to longueurs we don’t experience with Albrecht. Kaftan’s Fritz, Mathias Schulz, is the weak link in the cast, although his Grete, Sally Du Randt, gives possibly the finest available performance of the role on record. The Kaftan version also excels in the Bühnemusik, Schreker employs an onstage gypsy band, including D clarinet and cimbalom, all of which comes to the fore in Kaftan’s recording, but is disappointingly muted elsewhere.
The Kaftan probably gets the thumbs-up as the top recommendation then, but in a competitive field where every available version has considerable merits. This Albrecht version is the pick of the budget releases, at least in terms of the recording. Given the paucity of information in the liner, you’ll probably need to consult the internet if you want to find outmore about the opera. All that’s provided is a brief essay from Schreker himself about the work’s genesis, a bio of the composer and a brief synopsis. That’s about standard for budget reissues these days though, so no surprises there. But it’s the music that matters, and on that count this release is strongly recommended.