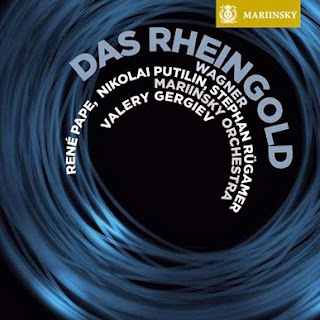 Gergiev’s Ring cycle on the Mariinsky label launched a few months ago with a superlative Walküre. The enthusiasm this release prompted (not least from me) managed to obscure the fact that the commercial release of the cycle had begun with the second opera, even though they were recorded in the correct order. Now that we reach Rheingold, it’s time to assess why that decision was made, and what it means for this opera, now deprived of its introductory status.
Comparison of the two recordings shows that actually there is not too much to worry about, and most of the qualities that distinguished the Walküre are also in evidence here. The decision probably came down more to the draw of the big names, particularly Kaufmann and Stemme, who can be guaranteed to draw publicity to any Wagner project either is involved in. Rheingold is more an ensemble piece and, just as Gergiev has the power to book the biggest stars in the opera world, he also has the resources at the Mariinsky to find a credible ensemble of singers for virtually any repertoire. René Pape and Ekaterina Gubanova again sing the roles of Wotan and Fricka, providing a continuity with the Walküre. And if this time they shine as the star performers in a way that they didn’t seem to the last time round, that has more to do with the work than the performances.
The audio quality is again exceptional, making the Prelude a particular treat. The Mariinsky doesn’t skip on anvils, which are also reproduced with impressive power and presence. The positioning of the singers, at least in the stereo mix, isn’t very imaginative though, apart from Erda (Zlata Bulycheva), who seems to have been placed off-stage somewhere, and a long way from any of the microphones.
The cast is more Russian than the last time round, but no less idiomatic in its delivery. In fact, Gergiev seems to be on a mission to show that the intense and passionate way the Russians do opera is ideally suited to Wagner, and everything on this recording supports his case. Pape and Gubanova give the most impressive performances, both in terms of their vocal dexterity and elegance and in the sheer emotion in their every utterance. No doubt we will have lost all sympathy for the gods by the time we get to the end of the cycle, but for the time being they are effectively presented as the sympathetic characters. Elsewhere we find Rhinemaidens singing more as individuals than as an ensemble (the high definition audio may emphasise this), but creating a more involving opening scene as a result. Nikolai Putilin gives a serious account of Alberich, with none of the buffoonery the role sometimes elicits onstage. Stephan Rügamer is a known quantity as Loge, having recently sung the part in Barenboim’s Ring cycles in Berlin, La Scala and at the Proms (look out for my review of the DVD of the La Scala Rheingold in the next few weeks), and he is just as impressive here. The giants are sung by two of Russia’s finest, Evgeny Nikitin and Mikhail Petrenko. Both give lyrical and musical performances, but surprisingly neither projects their tone with the power that might be expected of them.
Gergiev leads a disciplined performance from the orchestra. The horns at the opening are a particular treat, and he gives the woodwind soloists plenty of space to make the most of each of their appearances. The question of how Russian the orchestra sounds is tricky, but it is interesting to hear the first trumpet continuously trying to suppress his vibrato.
While Gergiev’s reading is intensely operatic, especially in the way that he leads and interacts with the singers, his approach to the music is distinctive and is bound to raise some eyebrows. As with the Walküre, tempos here are generally slow. That aids the clarity of sound, which is also helped by both the SACD audio and the excellent acoustic at the Mariinsky Concert Hall. Sadly, it also compromises the structure and flow of the music. As in the Walküre, Gergiev takes a big gamble on his slow tempos, presumably hoping that the dramatic set pieces will hold the rest together. In my opinion (though not everybody’s) that paid off in Walküre, with even the difficult Second Act cohering his unusually steady baton. But this Rheingold feels more choppy, especially as Gergiev tends to open out the textures for the orchestral interludes, but then snap back into tempo when the singing begins. The entrance of the giants is a prime example. The low brass here is just spectacular, and Gergiev takes their music at a slower tempo than most, or even any, other recordings. But then he jumps back to a steady pulse when they begin to sing, depriving both of grandeur. The Entry of the Gods into Valhalla also falls flat for some reason. Perhaps this time Gergiev is suppressing his urge to open the music out and so just pushes on to the double bar.
A few disappointments then, especially for those hoping for a complete Ring cycle of the quality of the previous Walküre. On the other hand, the two recordings are very much of apiece, and both deserve high recommendation. This Rheingold may not have the coherency we expect of the very best, but many of the key ingredients are of the highest quality. That includes the singing, which for many opera lovers is the over-riding concern. Gergiev’s conducting here, however, may prove to be a more acquired taste.