BRUCKNER Mass No. 3 in F Minor 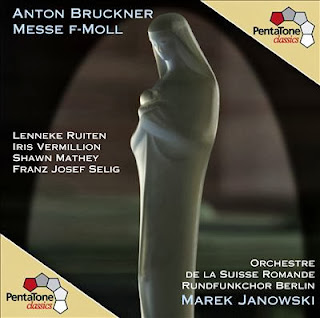 
Janowski’s Bruckner isn’t for everybody, but his interpretations are always fresh, and even the most cynical listener will find new insights in each of the releases in this PentaTone series. Having completed the symphony cycle, Janowski and his Geneva forces now move on to the Masses. As with his parallel Wagner cycle, the symphonies have all been characterized by strict and often fast tempos. Janowski’s approach has often seemed anti-romantic, or at least opposed to excessive sentiment. There has been plenty of emotion here too, though, but always within disciplined and highly structured interpretations.
Some of the symphonies have responded better than others to this treatment. The early symphonies in particular have been shown in a new light, with Janowski’s classicizing tendencies helping to elucidate their structural logic, and his eschewal of grandeur reducing the  otherwise overblown rhetoric down to a scale more appropriate to these shorter works. The Mass in F benefits too, but in different ways. As ever, Janowski’s tempos are fast and strict. But the scope for indulgence here is less than in the symphonies, and even the grand old men who dominate the Bruckner discography—Celibidache, Jochum etc.—seem fairly reticent to apply excessive rubato to this music. Janowski is a little faster than both of them, shaving a minute of two off each movement, but his tempos don’t feel that much stricter. There are one or two points that invite grandeur, and these are where Janowski pulls away from the crowd. The conclusion of the Gloria is one example: traditionally this music is all about scale and weight, but Janowski transforms it into a study of detail and texture. But Bruckner’s tempo indication is Sehr langsam, so there’s not much room to maneuver, and the pace here is little faster than in any of the classic recordings.
The Orchestre de la Suisse Romande plays as well for Janowski here as it has for each of his symphony recordings. So, as in those previous installments, the conductor’s emotional distance is ideally balanced by the warm and rich string sound. The trombones and horns also have an excellent tone in each of their chorales, and the various woodwind solos and obbligatos are all presented with both expression and precision. The choir matches the quality of the orchestra. The Rundfunkchor Berlin sounds like a large ensemble, but it is a well-trained one, and the clarity of the singing is ideal. The choir sounds a little distant at times, suggesting the microphones have been set at a distance, perhaps to increase the homogeneity of their sound. If so, it works, and the tone of both the orchestra and the choir has a luminous and unified quality throughout.
The vocal soloists are all up to the task, but the men are on finer form than the women. Bass Franz Josef Selig is the most impressive of the four, his tone rich and focused, and particularly impressive in the lower range. Tenor Shawn Mathey has a few small intonation problems, but he too has a rich and distinctive tone, which mixes well with the instrumental solos at the start of the Credo. Both soprano Lenneke Ruiten and mezzo Iris Vermillion have very operatic voices, and Ruiten in particular sounds a little too florid for this devotional context. Vermillion has the best diction of the four, although it is unlikely that many listeners will be unfamiliar with the words.
As ever, PentaTone achieves very high reproduction standards with their SACD audio. A particularly impressive effect is the sound of the pianissimo pedals from the cellos and basses that often underpin the choir. Instrumental obbligatos are often played very quietly too, Janowski presumably aware that he can trust the engineers to bring out these subsidiary details.
Not a bad addition, then, to Janowski’s ongoing Bruckner series. In the symphony recordings, his disciplined approach has often had the effect of readjusting the balance between the classical and the romantic traditions within the music, reducing its Mahlerian pre-echoes and instead acknowledging its debts to Schubert. With this Mass the historical lineage stretches back further, to the sacred music of the Renaissance. Again, Janowski’s asceticism serves to remind us of the music’s roots, especially through those imposing and austere trombone chorales, and in the emphatic declamations from the choir. Perhaps the results are anachronistic, but any obsession with the past that we might perceive is Bruckner’s: Janowski is only acknowledging what he finds in the score.