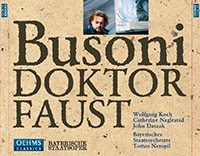 Considering what excellent material for opera the Faust legend provides, it is natural to feel frustrated that the only appearance it regularly makes in the world’s opera houses is in the reliable but psychologically lightweight version by Gounod. The Berlioz also makes occasional appearances, and among the real rarities are versions by Spohr and Schnittke. But Busoni’s is the Faust that does the most justice to the story, at least in terms of the complexities and paradoxes that we have come to read into the legend through its various literary and cinematic representations in the 20th century. Sadly, Busoni left the work incomplete, which may account for the lack of interest in the work in the first half of the 20th century. In recent years though, opera companies in the German-speaking world have taken a greater interest, giving the work a foothold in the repertoire there. (That’s still not the position it deserves though, and we’re no closer to ever seeing a staging in the UK.) This recording was made at the most recent production, given by Bavarian State Opera in 2008 as the centrepiece of that year’s Munich Opera Festival.
Looking through the images in the lavishly illustrated libretto booklet, it looks like this was a visually impressive production. Stark and arresting imagery seems to have been applied to every scene by director Nicolas Brieger and set designer Hermann Feuchter. The production seems to be particularly strong on the work’s religious overtones, one of the elements elaborated from Goethe’s version, which Busoni’s libretto (by the composer himself) otherwise keeps at arm’s length.
But even without the visuals, there is plenty to enjoy in this opera, and the music itself does an excellent job of carrying the narrative. The refracted bell chimes with which the opera opens give an idea of the harmonically complex but always direct language of the music to follow. Busoni relies heavily on strong choral singing, which is exactly what he gets from the Bavarian forces. He writes for a huge cast, although most of the roles are very small. The important leads are Faust himself, sung here by Wolfgang Koch, and Mephistopheles, sung by John Daszak. Both are ideal for their roles, bringing all the drama and engagement their interactions require. It can be difficult to distinguish between them though, such is the similarly between their voices, so attention is required to the, fortunately well articulated, words to work out what is going on.
The sound quality on the recording, presumably made in-house by Bavarian State Opera, is good. It is clearly a staged performance, and some the singers often sound some distance from the microphones. But the payoff is a reading that is truly dramatic and that unfolds at the pace of the drama.
There are a few competing versions of Busoni’s Doktor Faust currently available. The most intriguing is a version conducted by Adrian Boult, recorded in concert in 1959 but only released in 2012 on the LPO label. Boult had conducted the British premiere of the work in 1937 (both were concert versions). The 1959 performance was in a shortened version, apparently by Boult himself. The title character is sung by Dietrich Fischer-Dieskau, whose performance is the main attraction, beyond purely historical interest, of that release. There is also a more recent recording from Kent Nagano and the Lyon Opera, released on Erato in 2000. That is a very strong contender for a variety of reasons, not least Nagano’s (unusually) dynamic and dramatic interpretation. (It is curious that Nagano didn’t conduct this Munich production, given that he was Music Director of the company at the time and clearly knew the score well.)
The fact that Busoni left the opera incomplete raises the vexed question of competing editions and completions. Soon after Busoni’s death, his pupil Philipp Jarnach completed the work, providing a version that sufficed until 1982, when Anthony Beaumont produced a different completion, apparently more closely aligned to the sketches Busoni had left. Boult’s version doesn’t venture into any of these, whereas Nagano’s offers both completions. The recording at hand claims to only include the music that Busoni completed, but whatever is absent is not missed, as the result sounds perfectly coherent musically and certainly covers the whole story from beginning to end.
Despite the high production values from OEHMS, a knowledge of German is required to make much sense of the liner. The fact that the work is presented incomplete is only stated in German, and the libretto only appears in that language. But otherwise this is a very fine recording presented to a very high standard. Unlike the Nagano, which makes a credible claim to an authoritative status, both through its sheer quality and its traversal of both completions, this one is more of a document of a specific production. But what a production! Let’s hope a DVD release won’t be too far behind the CD.