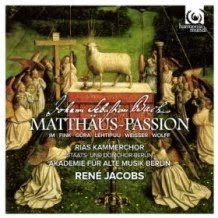 
René Jacobs is not new to the Matthew Passion. In 1985 he recorded the work, but as countertenor soloist in Philippe Herreweghe’s celebrated version. Now on the podium, Jacobs draws on his long experience, showing a keen affinity with the music, but reimagines at every turn. We’re long past the days when period performance was judged in terms of right and wrong, which is just as well, as Jacobs’ use of the historical sources is creative to say the least. Even so, the idea of ‘recreation’ is at the heart of this interpretation, and whatever liberties the conductor takes, he always gives the impression that his innovations are in the spirit of the music.
The two-SACD set (Part II is split after the chorale “Wer hat dich so geschlagen”) comes with a DVD containing a “making-of” documentary, produced for the release by Harmonia Mundi. On it, Jacobs explains that he is ‘recreating’ the antiphonal effect that the Thomaskirche congregants would originally have experienced, when the second choir and orchestra were placed in a gallery at the back of the church. I’ve only been listening in SACD stereo, but I’m guessing that the second ensemble is positioned in the rear channels to create this effect. What Jacobs doesn’t mention is that it’s been done before, by Jared Sachs and Jos van Veldhoven on a Channel Classics recording in 2010 (see my review). In fact the two recordings are very different, the van Velhoven live, this one in the studio. Jacobs also has a very different approach to the issue of spatiality. He interprets many of Picander’s lines to suggest that narrative concepts of distance should be recreated in the performance. So the second choir actually sounds distant, as do many of the vocal soloists. Sadly, all of this is a bit lost in the stereo SACD mix. Where Sacks thoughtfully redistributed his choral forces to left and right for stereo listeners, this Harmonia Mundi recordings just flattens out the surround, with the result that much of the singing just sounds frustratingly distant, and for no apparent reason.
The forces that Jacobs employs are surprisingly large. pace Joshua Rifkin, he uses choirs that amount to around 40 adults and 15 boy choristers. He also employs a second set of soloists, positioned at the rear with the second choir. Again the intention is to create aural perspectives that contrast proximity with distance, but in the stereo mix it is quite difficult to work out who is singing what.
Despite this being a studio recording, the sound favours atmosphere over detail. The counterpoint in the large choral numbers is surprisingly opaque; it’s all there if you know what to listen for, but there is never any feeling that Jacobs is highlighting the intricacies for the listener’s benefit. But the payoff is a big, warm sound that is always inviting and always attractive. All of the performers are on top form, the choral balance is excellent (the emotional variety between the chorales is particularly impressive), and the tonal control of the orchestral players is close to ideal. The chamber organs are surprisingly prominent, presumably emphasised to emulate the larger instruments of St Thomas’. The boys’ choir sing at the tops of their voices in the opening chorus, but the organ is equally prominent in the cantus firmus here. In later numbers, a great deal of time and effort has clearly been invested in getting the balances just right. Obbligato instruments are always distinct form the ensemble and just a shade beneath the vocal soloists. The viola da gamba is gratifyingly clear, and the perpetual balance problems that it poses in this work have been effectively addressed.
Among the solo voices, the standout performances come from alto Bernada Fink and bass-baritone Konstatin Wolff. Fink always sings with deep expression, and her free-flowing phrasing always carries the ensemble with her. Wolff has an extraordinary voice, his tone is soft and round, but he projects clearly and his tone is completely even across the entire range, even in the very lowest register. Werner Güra is a convincing Evangelist, finding just the right balance between straight narration and emotional engagement. Johannes Weisser is competent as Christ, but not as engaging as some of the singers in more minor roles.
One of the many interesting insights on the documentary is the extent to which this is a collaborative interpretive effort. Orchestra leader Bernhard Forck explains that the Akademie für Alte Musik Berlin doesn’t usually perform with a conductor, suggesting that he himself usually makes the decisions. The film then cuts to a planning meeting, where the soloists seem to be having far more of a say than Jacobs is comfortable with. Then there is a priceless piece of footage: Forck and Fink are preparing to record “Erbarme dich”.  They are standing at either side of Jacobs and discussing a range of musical details – in German. Jacobs sits between them looking disgruntled and after they’ve finished he mutters something under his breath in French. He needn’t worry though, because then they do a take and the results are magical. We see Fink struggling to hold back tears as she listens to Forck’s rich and elegantly ornamented obbligato line.
Ornamentation is quite liberal throughout this recording, raising the question of how much of that side of the interpretation Jacobs brought with him from Ghent and how much he was presented with when he arrived in Berlin. But however collaborative this project has been, the final results show a real unity of intent, and Jacobs’ interpretive fingerprints are evident on every phrase. True to form, Jacobs has created a distinctive reimagining of a familiar classic that doesn’t afford simple comparisons with the competition. This is a warm, emotive and very human Matthew Passion, less austere than most period performance recordings, and with all sorts of liberties taken with the historical evidence. But it is very convincing on its own terms and is performed throughout with conviction and with a real sense of collective musical insight. Warmly recommended.