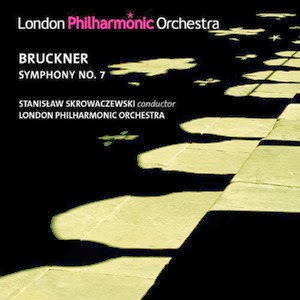 For Stanisław Skrowaczewski’s less observant fans, myself included, the announcement of this concert in 2012 seemed little short of miraculous. Skrowaczewski has never been in the very top league of conductors, but he has established a cult following on both sides of the Atlantic, in the US for his tenure with the Minnesota (then Minneapolis) Orchestra in the 60s, and in the UK for his work with the Hallé. His Bruckner credentials were secured in 2002 by a symphony cycle with the Saarbrücken RSO (OEHMS 207), one of the true greats. But given that he was approaching 80 when that set was released, his apparent silence in the intervening years could have been taken as a sign that he’d moved on to a better place.
As it turned out, the better place in question was Tokyo, as Skrowaczewski is still very much alive, and has spent much of the intervening period leading the Yomiuri Nippon Symphony Orchestra. This concert with the London Symphony was just one of his many Bruckner performances with European orchestras in the 2012-13 season; a Fourth Symphony with the Bergen Philharmonic (obligingly webstreamed live) proved equally revelatory.
In the Saarbrücken cycle, Skrowaczewski takes a different approach to each symphony. Some are sharply articulated with punchy accents, others smooth and undemonstrative. But the overriding concern in each is for line and form, he’s a conductor who understands, and is able to clearly communicate, the architecture of these works. The Saarbrücken Seventh is one of the smoother ones. Skrowaczewski relies on the work’s long, flowing melodies to propel the music and, for the most part, eschews surprising twists or emphatic drama. His reading is slow, Karajan or Haitink slow, and seems even slower for the continuity of tempo he maintains between sections. But this has the effect of concentrating the work’s musical focus, integrating everything into a single, organic unity where individual sections only make sense as part of the whole.
Ten years later and Skrowaczewski’s approach is much the same. If anything, the qualities that made the previous version so distinctive are even more pronounced. That sense of continuous, unbroken concentration remains, as does the feeling that the conductor has nothing to prove to anyone, he’s just presenting the music as he hears it. Tempos remain slow, especially in the first movement, which is magisterial in its almost tectonic flow. The Adagio is perhaps the most conventional movement, simply because many other conductors also take this continuous, even approach here. The Scherzo is more about elegance than drama, although there is plenty of both. And the Finale is a real culmination, like the end of some great journey.
With all due respect to the Saarbrücken RSO, the most significant difference between this and the 2002 recording is the quality of the playing from the London Philharmonic. Skrowaczewski really needs a luminous, round, and even string tone for his interpretation to make sense, and that’s exactly what this orchestra gives him. Also the woodwind solos have more character and the trombone and Wagner tuba chorales have an evenness and precision very rarely heard, even in this oft-recorded work. In fact, the LPO seems to be intent on positioning itself as the UK’s leading Bruckner orchestra. Other releases on its own label include (old, obviously) recordings of the Fourth, Seventh, and Eighth symphonies with Tennstedt, and a Sixth with Christoph Eschenbach. That Sixth really took me by surprise when it was released a few years ago; unlike Skrowaczewski, Eschenbach is hardly known for his Bruckner. But it is a stunning reading, and my review at the time was so effusive in its praise that it is quoted in the liner for this one.
I should concede that Skrowaczewski’s Seventh probably won’t be for everyone. His refusal to emphasize climaxes, or even to push the tempos when Bruckner specifies, could be considered perverse. His solution to the coda of the first movement is a case in point. He increases the volume continuously and evenly up to the last chord, but without varying the tempo; less sympathetic listeners may hear this as obsessive or even unfeeling. No one could accuse him of being boring though, nor formulaic. Whatever else you think of this Bruckner Seven, there is no doubt that it is completely distinctive. And those sympathetic to Skrowaczewski’s approach will find every note of it utterly compelling.