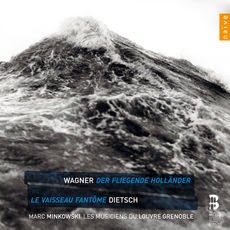 
This set offers an imaginative solution to a complex problem: how to make a French contribution to the Wagner bicentenary celebrations. Given the poor treatment the composer received in Paris, from management and audiences alike, the best that could be expected is some kind of atonement. In a way that’s what this is, but it’s much more exciting than that suggests. Marc Minkowski retraces Wagner’s steps as he arrives in Paris in 1839, determined to write a successful work for the Opéra. He failed, falling at the first hurdle, but the whole episode eventually gave rise to two operas, and Minkowski here presents them both.
Wagner was unable to convince the opera director Léon Pillet to commission his, then only fragmentary, Flying Dutchman but did manage to sell him the idea of a ‘Ghost Ship’ opera, while retaining sufficient rights over it himself to allow him to continue work on what eventually would reach the Dresden stage in 1843. In the mean time, Pillet passed the scenario to librettists Paul Foucher and Bénédict-Henri Révoil, and to chorusmaster-cum-composer Pierre-Louis Dietsch, who between them came up with Le Vaisseau fantôme.  Both works (Wagner’s in the original version) are brief one-acters, designed to precede an evening of ballet, so Minkowski combined the two into a single evening, giving performances in various European countries this summer.
The original, 1841, version of the Dutchman is itself a novelty, this only its second recording.  Just as unusual are the use of period instruments in Wagner (my only other experience to date was the Rattle/OAE Tristan act II in the Proms a few years ago), and the studio recording, a rarity for any opera these days. Minkowski’s orchestra is, no doubt, modelled on the French conventions of the day, so narrower bore brass are employed, even than in the OAE’s Tristan. The focus of the brass tone brings a valuable sense of clarity to the tuttis, although the woodwind don’t offer the same broad range of colours that made Rattle’s Tristan such a revelation. The gut strings reduce the ferocity of the storms, but so too does Minkowski’s interpretive approach. This is quite a reserved Dutchman, without the pyrotechnics you might hear from Barenboim at the other end of the spectrum. It is certainly dramatic, but Minkowski relies more on his singers than his players to provide the excitement. He’s assembled an excellent cast, admirably led by Evgeny Nikitin in the title role. He’s a known quantity in this role (apart from at Bayreuth, but that’s another story) and he doesn’t disappoint here. Ingela Brimberg is an impassioned and strident Senta, but she’s always in control of her tone, knowing exactly how close she’s getting to the edge in the more histrionic passages. In fact, the whole cast is excellent, each performance distinctive and dramatic, but all fitting into the ensemble, and into Minkowski’s tempered reading, with ease.
In a sense, Pierre-Loius Dietsch’s only opera is done a disservice by being coupled with this or anything by Wagner. The Dietsch has its merits, but they seem meagre indeed by comparison. It’s well worth hearing though, lacking in originality, but not in dramatic flair.  As a German working in Paris, Dietsch has an interestingly cosmopolitan perspective. The basis of his style is French Grand opera, but there are also elements of Rossini, Weber and...well, just about every other significant opera composer in Europe at the time. The overture is distinctly undramatic, at least compared to Wagner’s, but as soon as the singing starts the interest increases. The ensembles and choruses provide some of the most satisfying listening, although even here the music rarely approaches the level of drama that Wagner achieves. Minkowski sensibly engages an almost completely different cast, partly because of endurance issues in the live performances I suspect, but also because Dietsch’s writing is more lyrical and requires a more bel canto approach. The standout performance here is Sally Matthews as Minna (as Senta has now become). Her tone is distinctive and engaging throughout, without detracting from the generally rounder sounds of this score. Russell Braun is good as Troïl (the Dutchman – although here he’s Swedish), his performance not as memorable as Nikitin’s, but the score may be partly to blame for that. Two singers appear in both operas, Eric Cutler as Georg/Éric and Bernard Richter as Steuermann/Magnus. This last role is based on Erik, in that he is Minna’s (ie Senta’s) sometime other half, but his main role in the music is as the lyrical tenor who belts out the top notes, including two top Ds in a single aria, which Richter handles with ease.
The sound is good throughout, with the singers well balanced against the orchestra, if a little recessed at times. Playing standards are high, especially given the instruments in use. The set can be easily recommended solely for the Wagner, one of the most interesting and distinctive contributions to his discography in this anniversary year. It’s not the most dramatic reading out there, but it compensates in all sorts of other ways. The Dietsch only really has novelty appeal, but it’s well worth hearing at least once. A well-conceived project all-round, made all the more appealing for the high performance standards with which it is presented.