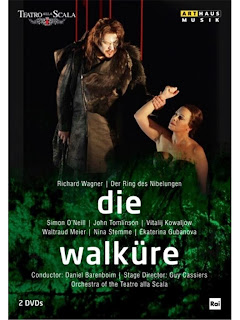 
After the unusual ballet/opera staging of Rheingold that began Guy Cassiers’ Ring cycle, this Walküre is a more conventional affair. The Eastman Ballet Company, who were an almost continual presence in Rheingold (review here) are here in little evidence, the only choreography a few figures projected onto the backdrop. Similar, though, is the colour scheme and visual profile, so again we have an uncluttered stage, with just a few props, all large and steeped in symbolism, and bathed in pastel blue and green shades. The costumes suggest decaying Victoriana, imagery that goes back to Chéreau but that has been revisited many times since, most recently in the Tankred Dorst Ring Cycle at Bayreuth.
By this second instalment, it is now clear that Cassiers takes more interest in the Personenregie than he does on spectacle, which is clearly the right approach, given the dramatic abilities of his cast. It perhaps makes things more difficult for video director Emanuele Garofalo, but by weighing the montage more in favour of close-ups than wide angles, the film gives us all the detail we need.
Daniel Barenboim continues his reign of world domination as a Wagner conductor here. It has taken him a few decades to refine his approach, but this, and almost every other Wagner recording he has made in recent years more than make up for the rigid and unidiomatic offerings from his early years with the Berlin State Opera in the early 1990s. The conducting here is consistently proficient, and in many sections truly inspired. The way he drives the orchestra into the concluding pages of the first and second acts is as exhilarating as you’ll hear anywhere. Barenboim is clearly aware of this, and a close-up on him the moment the first act finishes shows him exhausted but clearly brimming with pride at what he has just achieved. The La Scala orchestra plays well for him. In comparison to his Berlin forces, the string sound isn’t as rich and the low brass lacks weight. But the woodwind soloists are particularly fine, and the orchestra operates brilliantly as an ensemble for each set piece and scene change.
Every member of the cast is world-class, but that doesn’t make the casting even. The standout performances are from Waltraud Meier as Sieglinde, John Tomlinson as Hunding and Nina Stemme as Brünnhilde. Simon O’Neil is a proficient Siegmund, but he lacks experience and he could do with more metal in his voice. He must be at least 20 years younger than Meier, so it takes a leap of imagination to believe them twins. Throughout their exchanges, there is a feeling that she is showing him what to do, leading the drama simply through the greater force of her experience. As with many recent performances in which Tomlinson has taken a subsidiary role (his Pogner at Covent Garden last year also comes to mind), the only problem with his performance as Hunding is the extent to which he overshadows and actual bass lead, Vatilij Kowaljow as Wotan. Tomlinson’s Hunding has it all: power, menace and an electric stage presence that allows him to dominate the first two acts despite his relatively brief appearances. Kowaljow in not deficient as Wotan, his voice has power and character, his pronunciation is excellent and his acting isn’t bad, it’s just that he’s not John Tomlinson, whose Wotan will live on in the memory, even without the man himself reminding us of it by actually being present on the stage.
Some aspects of the stage design seem a little under ambitious, especially given that this is a co-production between two of the world’s greatest opera houses. Even so, the small devices carry their symbolic weight just as well as the large ones. A spinning sphere appears above the stage midway through the first act, with letters, symbols and colours projected onto it, an ambiguous psychological device  but not an undue distraction. Long ribbons hang down across the stage in the second act, efficiently representing the forest setting in the later scenes. The valkyries’ horses appear as a huge, static bronze-effect prop at the back of the stage. The whole issue of horses in the Ring cycle is touchy, with many directors seemingly of the opinion that physical representation risks fetishising them. In Cassiers’ production, physiologically engaged with the work on so many levels, that’s never a risk.
The video of the staging was made for Italian television, and, as with Rheingold, the programme opens with a title sequence accompanied by an annoying montage of Leitmotifs. But the filming itself is well done. The leads have radio mics, affording immediacy, although the Valkyries do not, and sound distant. Voices and orchestra are mixed into a fairly harshly separated stereo (I haven’t heard the surround), but this doesn’t disorientate too much.
A high recommendation, then, for this Walkürie, well worth seeing, especially for the contributions, both musical and dramatic, from Meier, Tomlinson, Stemme and, of course, Barenboim himself.