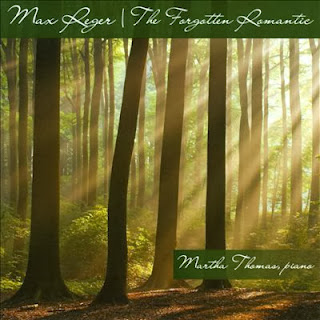 Is Max Reger really a “Forgotten Romantic,” as the title of this set describes him? Not in the German-speaking world, where organists, pianists, and conductors have continuously championed his music since his early death in 1916. Quite why he hasn’t caught on with Anglophone listeners is an enduring mystery, but Martha Thomas is to be praised for her efforts in this regard, presenting an excellent selection of highly accessible works that demonstrates a facet of the composer’s art that’s a very long way from the stereotypes of furrow-browed gloom and impenetrable counterpoint that are often associated with his name.
In fact, Reger was capable of lightness, humor, and, perhaps most surprisingly of all, brevity when it came to writing to the piano. The music presented here is mostly in the form of piano miniatures, character pieces and intermezzos that draw on the traditions of Schumann and Brahms, but with a liberal sprinkling of Regerisms: unexpected harmonic shifts, sudden intemperate outbursts, and abrupt, ambiguous cadences. The program is cleverly devised to gradually draw the ear in. Disc one opens with Silhouetten, op. 53, the most elegant and flowing music in the collection. Martha Thomas performs with real authority from the first, giving the music just the right degree of levity, while always retaining a sense of poise. The op. 44 Vortragsstüke are more in the spirit of character pieces, with a great deal of variety from one movement to the next. Disc one closes with the op. 45 Intermezzi. These are more dramatic and involved, and while Thomas’s playing retains its clarity and sense of purpose, an occasional feeling of lack of emotional involvement creeps in in the more emphatic and impassioned episodes.
No such concerns on the second disc though. In Reger’s short life, he managed to publish an extraordinary 147 works with opus numbers. But even this is only a fraction of his actual output. The reasons for his other music not reaching the printing presses during his lifetime and therefore not receiving opus numbers are many, but supposed lack of commercial viability tops the list in most cases. The two sets of works that appear on disc two are in this category, although it is a challenge finding any issues of reduced accessibility that might separate them from the works on disc one. Blätter und Blüten are simple but colorful works, many hovering around the one minute mark but never seeming rushed or interrupted for their brief duration. The Six Pieces that conclude the program seem to have been collected for publication (by Breitkopf & Härtel) in 1943, but musical connections between them are few. The collection opens with a Fughette (like Reger’s sonatinas and Sinfonietta, the diminutive here seems more a result of self-deprecation that diminutive musical stature). This single piece attests to another aspect of Reger’s art: his devotion to the counterpoint of Bach. It is a great neobaroque fugue, but stylistically it really doesn’t fit into this program. The rest of this final collection does though, more or less, although all of these movements are longer, and many lack the focus and musical concentration that characterize the works on the first disc: Reger’s famed megalomania finally rising to the surface?
In terms of solo piano repertoire, Reger is better known for his larger-scale works, his sonatinas and his variations sets on Bach and Telemann. For those, or a selection at least, I’d recommend the recording by Wolfram Lorenzen on the Troubadisc label (TRO-CD-1438). His approach is more dramatic than Thomas’s, and the acoustic in which he is recorded is more resonant. But then, he’s playing music that requires a more dramatic approach and, arguably, a more atmospheric aural setting. Martha Thomas instead presents vignettes and does so in a delicate and considered style, with plenty of life and grace, but with a notable absence of bombast. Potential buyers concerned that that last attribute is the over-riding feature of all Reger’s music need have no fear in the case of this attractive and enjoyable album.