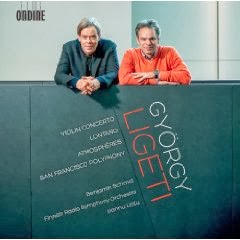 
Once upon a time, a recording of Ligeti’s seminal orchestral scores of the 1960s and 70s would have been considered a brave and unusual undertaking. Not any more though, as both the size and quality of the Ligeti discography take the novelty off any new additions. That’s not to say that new releases aren’t welcome though, and successive recordings have shown that different performers can bring new perspectives to these works that predecessors may have overlooked. The Finnish conductor Hannu Lintu provides a fascinating liner note to his new release, in which he rightly points out that, despite the Modernist aesthetic, Ligeti’s music makes interpretive demands on its performers that are more akin to the Romantic repertoire. Not only do the technical issues have to be resolved according to subjective criteria, but expression must be conveyed through the music too.
In fact, Lintu’s reading of these scores equates the music’s meaning with the technical challenges of its performance much more than his words suggest. In a later passage of the liner, he discusses Atmosphères and makes the following statement: “What is exceptional in Atmosphères in the context of Western music is that the performers are utterly unable to determine what material is important and what is less important. The whole work seems to occupy the same level of attention, and no sense of depth is created because the various elements are all of equal weight.” I’m not sure that’s true, but it proves to be the credo by which all the works are interpreted. Lintu and the Ondine engineers studiously avoid any concept of depth that the music might suggest at either literal or metaphorical levels. So the microphones are placed close to each section, closing up the sound stage and preventing any sense of physical perspective across the orchestra. Dynamic levels are kept even, with the result that lines and textures that other conductors may consider peripheral are here given elevated prominence to bring them to a state of equality. The orchestra has clearly been very well rehearsed, and from a technical point of view this might be the most accurate and proficient reading of all four works now available. But, as Lintu himself states, just playing the notes isn’t everything, and interpretation-wise, each of the works struggles when compared with the best of the competition.
That, in my opinion, is the Ligeti Edition (at least for the purely orchestral works), which began on Sony, but by the time it had reached these scores had transferred to Teldec. Jonathan Nott’s recording with the Berlin Philharmonic (Lontano, Atmosphères, and  San Francisco Polyphony all appear on Teldec 8573-88261-2) makes full use of the finest technology available at the time (2002) and of the finest orchestra too. The rich and distinctive BPO sound benefits every aspect of the music, and the velvety string sound is a particular asset. The soundstage is deep and involving, allowing the minute details of the score to appear from different corners of the orchestra, and to subtly mingle, but without ever blending into undifferentiated blocks.
Lintu’s recording has detail as well, but it is presented in a more matter-of-fact way by an orchestra with a clearer, less distinct sound, and engineering that strives for equality of balance at all costs. The results are more analytical, of benefit to students of Ligeti’s radical orchestration, but less so to listeners wishing to enjoy the music. The up-front immediacy of the playing and recording seems ironic in the context of Lontano, a work all about aural, physical, and metaphorical representations of distance. Even so, this performance is the best thing on the CD, with the accuracy of the ensemble proving particularly beneficial, and Lintu (or Ondine?) was right to put it first. Atmosphères feels cold and, well, not very atmospheric, while San Francisco Polyphony generates the ideal sense of disorientation in the opening passages, but becomes wearing on the ear in a way that other recordings don’t.
The Violin Concerto is also very well represented on disc. A recent favorite is the Patricia Kopatchinskaja recording with Peter Eötvös (Naïve V 5285, reviewed 36:4), in which the Eastern European folk roots of the music are brought to the fore in a lively and utterly distinctive reading. Benjamin Schmid is at the other end of the scale, and like Lintu, he provides a documentary account, avoiding needless idiosyncrasy. Technically, his is a proficient reading (which is saying something), but it just feels too reserved. The one exception is the Aria second movement, in which he brings a rich and attractive viola-like tone to the low-register melodic lines. Lintu again brings out every detail of the orchestration, revealing all sorts of curious anomalies and clashes (the orchestral strings are tuned to a range of competing standards and temperaments). This is occasionally to the soloist’s detriment though, especially as the engineers give the orchestra much more prominence over him than either the score suggests or his projection allows him to compete against.
Pursuit of detail is clearly what has motivated Hannu Lintu in this project, so it is a shame that the disc was not released in SACD. When it was independent, the Finnish Ondine label issued many of their releases in SACD, but after it was bought by Naxos this came to an end, in line with the latter company’s aversion to the medium. While all these works have been recorded many times before, neither they, nor, I think, any of Ligeti’s works has yet appeared on any high resolution format (apart from one recording of the Horn Trio on BIS). Given the levels of complexity and detail in these scores, that seems like a missed opportunity. In a high-resolution format, this recording may have had something unique to offer, especially given the attention those details have clearly received from conductor, players, and engineers alike. As it is, the recording sits somewhere near the top in a competitive field, but all of these works are available elsewhere in more convincing and more engaging readings.