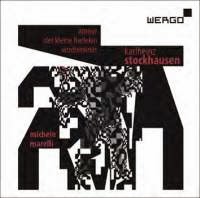 It’s not unusual for composers to think very highly of themselves, but Karlheinz Stockhausen seems to have turned ego into a whole new art form. As he’s no longer with us, that might just be considered a matter of historical interest, but, sadly, his devotees seem to be continuing the adulation, both of the man and the music: not helpful for the rest of us trying to contextualize and rate his undeniable achievements. Clarinetist Michele Marelli worked with Stockhausen for 10 years and he’s clearly one of the true believers. His liner note essay is cringingly sycophantic, causally referring to Stockhausen as a ‘genius’ and ‘Maestro,’ and to WOCHENKRIES, one of the works presented here, as ‘a masterpiece,’ as if any debate on the matter was wholly redundant.
It’s not a masterpiece, and nor are any of these works, at least not when judged against his finest scores. Nevertheless, Stockhausen wrote well for the clarinet, and much of the music here, which dates from the 1970s and 80s, is engaging and original. Marelli writes that the theme of the album is joy. Ever loyal, he focuses specifically on “the joy that the act of composing aroused in Stockhausen,” but he sells himself short: The music is indeed joyous, but seems so more for the enthusiasm of the player himself than for anything intrinsic to the compositions.
Marelli’s clarinet tone is unusual, quite woody and not particularly round. That allows him to focus in on the individual pitches, even in fast passages, but means he has to work harder to make the music sing. Stockhausen generally avoids extended performance techniques in these three works, instead employing a very gestural, even theatrical, mode of musical discourse, often based on simple motifs, runs, and series. Marelli tells us that much of this music is very difficult to perform, but he takes it all in his stride. He makes it sound easy, and that can be a problem. Like many new-music specialists he’s in a conundrum: The composer has taken his virtuosity for granted and written apparently difficult music that generally doesn’t sound so. We just have to take the player’s word for it.
The album opens with AMOUR, five vignettes written, as Marelli tells us “as gifts for women whom Stockhausen was deeply connected to.” It adds up to a lively suite, aphoristic and surprisingly unassuming. The only slightly distasteful aspect is the sheer number of movements that make it up. Marelli is, I think, being coy in his description of the work’s multiple inspirations, and a less charitable interpretation could have it that Stockhausen is using the format to brazenly flaunt his polygamous lifestyle.
One of the women “whom Stockhausen was deeply connected to” is the clarinetist Suzanne Stephens, who was the inspiration for DER KLEINE HARLEKIN (the all caps titles don’t exactly suggest modesty either, do they?). This is one of Stockhausen’s most often performed works. It’s been recorded many times too, but loses something in audio only format. The piece requires the player to dress up and to dance, and the music is only one aspect of the performance. Nevertheless, Marelli always ensures there is plenty of theatricality in his reading, and he gives a technically impressive performance. It’s a very similar piece to AMOUR though, and you can easily miss the switchover if you’re not paying attention.
The last piece on the album, WOCHENKREIS, was another project instigated by Suzanne Stephens. In fact, it could be argued that the piece is by Suzanne Stephens, at least in collaboration with Stockhausen’s son, Simon. In 1988, the two of them made this arrangement, for basset horn and synthesizer, of music from Stockhausen’s MONTAG aus LICHT. Stockhausen himself tells us that “In subsequent rehearsals with me, this version found its final form,” which sounds like a slightly desperate appeal for the work to be considered echt Stockhausen. That would be much easier to accept it were not for the synthesizer part. No doubt this was the state of the art in 1988, but the noises that come out of the instrument are just dreadful: course, undifferentiated, and continually grating on the ear for the full half hour duration. Given that Stockhausen is rightly considered the godfather of electronic music, presenting this quantity of amateur-sounding synthesizer music under his name does his reputation no favors at all.
No doubt there are many recordings out there of Stockhausen’s music for clarinet. The only other one I’ve come across is the bass clarinet and piano recital by Volker Hemken and Steffen Schleiermacher (MDG 613 1451-2), which is an excellent introduction to the composer’s instrumental and chamber works, and is far more enjoyable and interesting than the disc at hand.