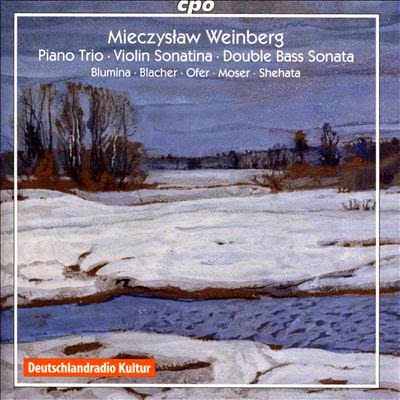 
The Weinberg revival continues apace. This is the ninth release in cpo’s Weinberg chamber music series, which is appearing in parallel with a symphony cycle on Chandos, several new reissues on Melodiya, and an extensive range of Weinberg recordings on Naxos (any others I’ve missed?). In fact, the narrative of neglect and revival is becoming increasingly anachronistic: All of the works presented here deserve a wider audience, but none is a first recording, and the Piano Trio at least already has something of a presence in the repertoire. But what is becoming clear from the increased exposure is that the quality and inspiration of the Weinberg’s music is variable. His advocates have long promoted every note that he wrote, but, as with almost all extremely industrious composers, his greatest works stand out, and many of his others deserve their obscurity. Thankfully, all three of the pieces presented here are from the top drawer. The Piano Trio must rank as one of Weinberg’s greatest chamber works, the Violin Sonatina is less ambitious but no less successful, and the Double Bass Sonata is much more than a novelty filler, its music of staggering sophistication and subtlety.
Appreciation of Weinberg’s music seems to be increasingly constrained by the comparisons often made to Shostakovich. Nevertheless, the Piano Trio actively invites such parallels. It was written in 1945, and wartime memories loom large across its four movements. There is a Shostakovich-like intensity to the first two movements, in the continually oppressive textures of the first and the maniacal, ostinato-driven 5/4 of the second. But then the work gradually winds down across its longer third and fourth movements to a quiet but uneasy resolution at the end.
The Sonatina for Violin and Piano was written soon after, in 1946. Its textures are lighter, more melody focused, yet there remains a dark psychology at work here. The music seems throughout to be striving for resolution or equilibrium, yet its meandering melodic lines keep sending it off course in unexpected directions. All of this contrasts its seemingly traditional three movement structure, as if the formal organisation is itself an image of the order and balance to which the music aspires, yet can never seem to achieve.
The Sonata for Solo Double Bass is a much later work, from the 1970s, when Weinberg was writing sonatas for a range of unusual solo instruments. The sonata is structured more like a suite, in six short and contrasting movements. The surprise here is the sheer diversity of ideas and textures that the composer is able to elicit from such an apparently unpromising solo instrument. And there is never any sense of the composer working against the instrument’s constraints, but rather exploiting the potential that he finds. For example, the lower registers are sometimes used to create dour, morbid sounds, but at other times provide a sprightly bass resonance to punctuate faster passages. And much of this music is very fast. It never sounds as if it is pushing against the technical limitations of the instrument, but this must by as much a result of Nabil Shehata’s virtuosity as it is of Weinberg’s idiomatic writing.
The performances are excellent throughout. Pianist and series curator Elisaveta Blumina gives a muscular and focussed lead in the trio and a sensitive accompaniment in the sonatina. The sound engineering is also excellent, but the string players need have no fear of the detailed scrutiny to which it subjects them. Weinberg’s string writing ranges from the Romantic and impassioned to the direct and heartfelt (though I wouldn’t say naive), and the performers present it with an appropriate range of expression, while always maintaining impeccable tuning and ensemble. An impressive release all round, warmly recommended, even to Weinberg sceptics: the piano trio, especially in this performance, might just win you round.