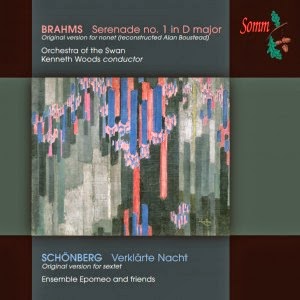 Both works here are better known in larger, later arrangements, but Ken Woods and his colleagues demonstrate that impressive clarity and focus can be achieved through the original incarnations. Verklärte Nacht is presented in its string sextet version, while the Brahms op. 11 Serenade is performed by an ensemble of nine, the forces for which it was originally written, although that score is lost and the version here was reconstructed by Alan Bousted in the 1980s.
Whether performed by sextet or string orchestra, Verklärte Nacht is usually interpreted to emphasise the dense textures, and half-lit effects of its richly voiced scoring; scene setting is usually the order of the day. But this group, the string trio Ensemble Epomeo with three extra players, instead strives for, and achieves, clarity of line and texture. The textures are appropriately bass heavy, and the two cellos dominate, but every line comes through with exceptional clarity. This gives the piece a new profile, with the complex but now clear counterpoint driving the music and leading the ear through the harmonic web. There is atmosphere here too, and much warmth in the ensemble’s sound, but that is never at the expense of the individual lines. My only complaint is that there is a slight reticence that holds back the magisterial climaxes. Those cadences, where suddenly a radiant major chord appears from the dense and increasingly dour lead-up, they don’t quite have the sense of exaltation you will hear in other recordings, especially of the orchestral version. Generally, though, this is an impressive recording, and one that exposes many details of the score that usually remain obscure.
The chamber version of the Serenade is similarly open in its textures and is presented with equal clarity and precision. This time round, though, there is less need for such an analytical approach. Even in its larger version, this work is all about clarity and directness of expression. Woods, who now moves from the cello desk to the podium, gives an appropriately bright and carefree account. The players interact well, and there is a clear unity of intent within the ensemble. A few slight tuning problems in the midrange woodwinds are the only technical problems to report with the playing. Sadly, the quality of the recording doesn’t match that in the Schoenberg. Despite the small size of the ensemble, many of the players, the winds especially, sound frustratingly distant. There is plenty of bass, but it often sounds boomy and unnatural. All of which is a shame, because this is otherwise and enjoyable and engaging reading.
Ken Woods, as ever, provides detailed and very readable liner notes. Both recordings are of live performances, full details of which are also provided in the liner. All round, a revealing and enjoyable disc, but recommended primarily for the Schoenberg.