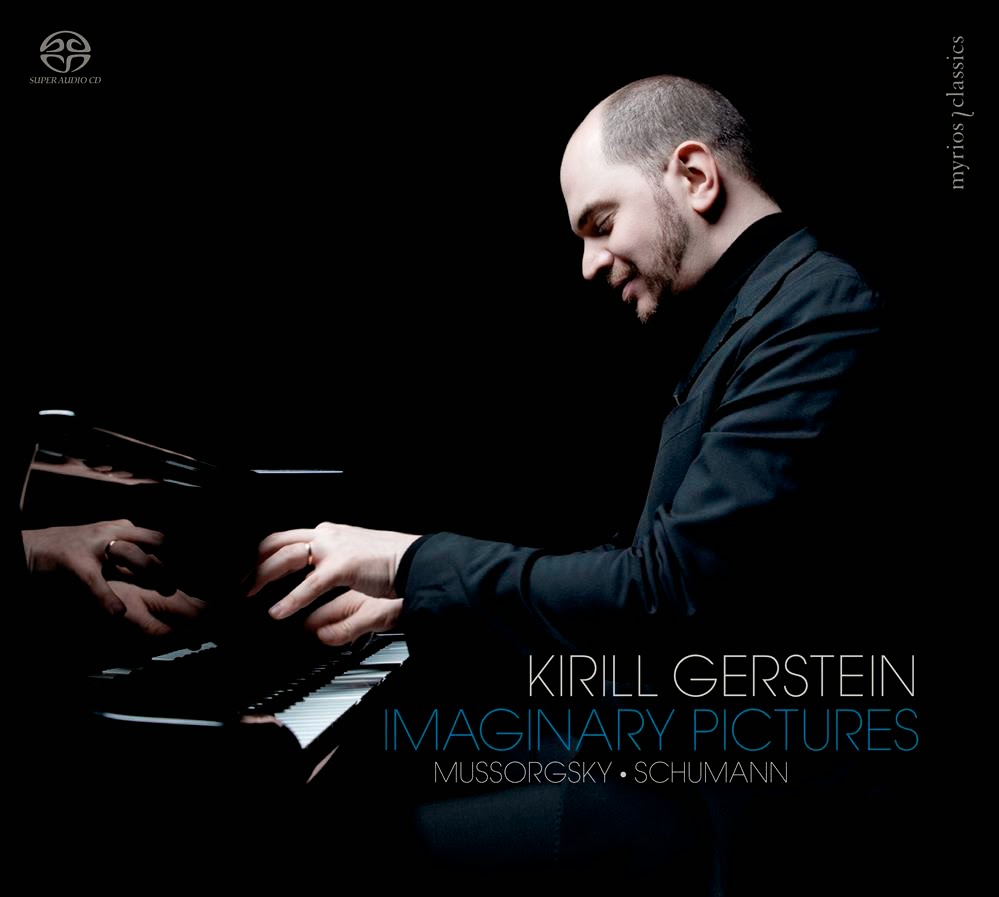 
These two piano cycles may seem disparate – they certainly sound very different – but Kirill Gerstein has good reason to programme them together. As he points out in his liner notes, both are filled with vivid portrayals, or Imaginary Pictures as the album title has it. That comparison only goes so far: Mussorgsky’s landscapes are more literal and Schumann’s portraits more psychological, but Gerstein never overstates his case, ensuring the works also retain their distinct identities.
His readings are assured and well conceived. They build on the representative aspects of the works though a real focus on the atmosphere and character of each movement. His technique is “Russian” in many ways, specifically his very definite touch – even in the more mystical movements, the textures are always founded on clearly audible individual notes, each with its own articulation. The SACD audio helps bring out that level of detail, but the sound is not unduly analytical, and the technology is used as much to bring atmosphere and presence to the piano sound.
Gerstein has plenty of physical power behind his playing, but it is always used sparingly. Climaxes and heavy downbeats are just as often emphasised through slight delay as actual force. That rubato is often applied quite daringly, in the first Promenade of Pictures, for example, and in Bydło. It is unusual in both cases, given their processional character, but, as befits the theme of the album, it invites programmatic responses. Our visitor to the exhibition is, after all, promenading – he’s not marching so there is no reason his steps should be even. Similarly the ox pulling the cart seems here to be straining under the weight, its gait becoming plodding and slightly irregular. The momentary dissonances in the middle of the left hand texture are also brought out to impressive effect, and some surprising staccatos in the melody add character, but without disrupting the flow.
There is an earthiness about Gerstein’s playing that lends atmosphere and gravitas to many of the Mussorgsky movements. The Old Castle is given a particularly characterful reading, and more from the tone colour than through any indulgences of rubato or dynamic. Some of the faster movement lack lightness, or at least that quality often seems hard-won. Tuileries is quite slow, and doesn’t quite find the capriccioso quality prescribed in the score. Similarly with The Market Place at Limoges, although Gerstein brings back his daring rubato here, which serves to enliven the proceedings.
Similar dichotomies abound in Carnaval. Much of the music seems heavier than in the Mussorgsky (thicker chord-voicing perhaps?) yet the playing is always propulsive and never weighed down, either by the details Gerstein applies or by his interpretive aims. But again, the pictorial dimension of the music comes through more in the earthy qualities of Gerstein’s tone and in the variety of means by which he invokes drama and passion – so more Florestan than Eusebius.  The latter gets his due, though, especially through the warmth and lyricism that Gerstein often finds in the quieter movements.
As the Schumann goes on, it seems Gerstein gets further and further from his aim of drawing parallels between the two works (an aim that seems particularly pressing at the start, where the Schumann begins immediately after the Mussorgsky has finished). But in an impressive stroke of programming genius, he brings us back round in the finale by presenting the Davidsbündler march almost as a recollection of The Great Gate of Kiev. Both are bold, strident and joyous, with Gerstein finally giving his performance the full physical power he is capable of, while still maintaining the absolute precision and detail. Memorable conclusions to impressive readings of both works.