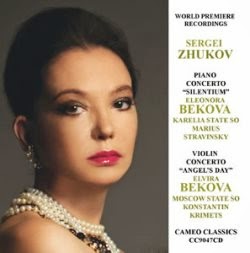 Tailor-made concertos for piano and violin appear here in premiere recordings by the soloists who inspired them. There is certainly a synergy here, with the composer, Sergei Zhukov, responding to both the technique and the temperaments of his intended soloists, sisters Eleonora and Elvira Bekova, and the soloists, in turn, giving idiomatic and finely crafted performances. But the music itself is heavy going—populist perhaps, but in a furrow-browed, Slavic way—and demands much of the listener, not least sympathy for its high-minded artistic aims and a superhuman attention span.
Zhukov (b. 1951) is a Ukrainian composer of Russian training. On the evidence of this recording, he is an eclectic musical thinker who is happy to steer his music into episodes of jazz or religious Minimalism, always confident that he can get back out again and return to his personal idiom. That basic style is Modernist, with some Expressionist outbursts at times, but usually quite consonant in its harmonies, the dissonances more diatonic than chromatic. While there is no tonal architecture here, some of the individual passages have a strong tonal identity, especially climaxes, which often fall back on film music clichés.
The piano concerto is entitled “Silentium,” after a poem by Osip Mandelstam. The poem itself is recited by the pianist over some mood music near the end, a very direct gesture but one of questionable musical taste. The concerto is in five parts, each addressing in a different way the relationship between sound and silence. The 20 seconds of silence at the start of the first track isn’t tape leader, it’s part of the work. The music gradually emerges from the silence, and regularly returns to it as a point of repose.
The violin concerto carries the title “Angel’s Day,” and explores themes of celestial transcendence as understood in the Christian, Jewish, and Muslim faiths. It too is a multifarious and semantically complex work, moving in and out of styles and moods, with everything given a feeling of earnest philosophical significance by the sheer symphonic scale of the proceedings. There are occasional quotations, or at least fleeting references, to earlier works. The liner identifies Prokofiev and Glinka, but I hear Wagner and Strauss too. But these evaporate almost as soon as they appear, leaving yet more questions unanswered for the uninitiated listener.
The solo parts are adventurous and as stylistically diverse as the orchestral writing. They don’t sound particularly virtuosic, although that may be a result of the soloists’ proficiency. Zhukov creates some interesting relationships between soloist and ensemble, for example setting the piano against the percussion, or combining the orchestral strings with the violin soloist as a kind of halo around her ethereal lines. The performances are proficient, with the orchestras as atuned to Zhukov’s aesthetic as the soloists. Audio is reasonable, though a little recessed and not very involving. The piano in particular sounds distant and boxy, especially in the upper range, though it is difficult to tell if this the fault of the engineering or the instrument itself. Some audience noise in the violin concerto reveals this to be a live performance, though no recording information is given.
It’s puerile and childish to lampoon the poorly translated liner texts, but I can’t resist. Violinist Eleonora Bekova is, we are told, “both eye and ear catching with an intriguing provenance.” Her being eye-catching is presumably the reason she gets the front cover to herself, but her intriguing provenance is not explained any further. In fact, the Bekova sisters are from Kazakhstan, but both play very much from within the Russian tradition: Both have a precise, emphatic technique, often delicate of tone, but never casual. The bio for violinist Elvira Bekova opens with an encomium from Aram Khachaturian, suggesting she’s no spring chicken. Khachaturian was impressed, though, with what he described as her “fiery temperament and virtuosity,” so too was David Oistrakh, who is quoted describing her sound as “unique,” though it is not clear if he meant that in a good way.
Zhukov’s concertos are serious business, and for those with a taste for mainstream new music from Russia, there is much here to savor. Both works are long, each approaching 40 minutes, and neither attempts to justify that length through continuous invention. Instead, the sheer breadth of the music, with long, arching phrases built on repeating figures, accounts for the duration. Minimalist means to maximal ends.